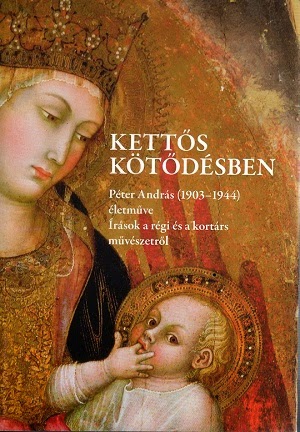 Last December marked the 70th anniversary of the death of art historian András Péter. He was a noted scholar of Italian Trecento painting, as well as of Hungarian medieval art. Born in 1903, he studied in Budapest and defended his doctorate in 1925. The subject of his dissertation was the representation of Hungarian holy kings in medieval art. Later he published a series of important articles on key figures of Italian Trecento painting, especially on Sienese masters such as the Lorenzetti brothers and Simone Martini. Material for these studies was collected during his research trips to Italy, most notably through a grant at the Hungarian Historical Institute in Rome (1926-27). In 1930, he published a ground-breaking survey of the history of Hungarian art. In 1935, he became a tutor at the art history department of Tibor Gerevich at Budapest University (named after Péter Pázmány at the time, and now known as Eötvös Loránd University).

His monograph on Italian Trecento painting, however, remained unfinished, and was published posthumously in 1983. Now a new volume has appeared, which contains the collected studies of András Péter. Edited by Mária Prokopp and Károly Tóth, the book republishes his writings in chronological order, starting with his dissertation, which was previously only available in manuscript form. Several of these studies were published in international journals, and are considered important contributions to this day.

Below are some of his studies which can be consulted online:

His full bibliography can also be consulted online, as compiled by the Library of the Museum of Fine Arts.

András Péter's career was cut short by the Holocaust. He stayed in Budapest even during the German occupation of Hungary and during the rule of the Arrow Cross. He was arrested by the Arrow Cross, and killed on December 9th, 1944. Sadly, he was not the only important art historian who fell victim to the Holocaust in Hungary. We should mention first of all his friend, György Gombosi, another noted scholar of Italian early renaissance art, who died in Auschwitz in early 1945. Others include József Bíró, an eminent historian of art in Transylvania, who was shot into the Danube together with his elderly father at the beginning of 1945 (see here his monograph on palaces in Transylvania); and art critic Artúr Elek, who committed suicide after Germany occupied Hungary in 1944. A friend of Ernst Gombrich, József Bodonyi, who had studied with Julius von Schlosser in Vienna and wrote his dissertation on the origin of gold background in Late Antique painting, also died in 1944 after returning to Hungary. A generation of (mostly Jewish) Hungarian art historians had already emigrated from Hungary after 1919 including Johannes Wilde, Frederick Antal, Arnold Hauser and Charles de Tolnay. We should also mention Jenő Lányi, who only spent his childhood in Hungary, as he studied in Vienna and Munich. A scholar of Jacopo della Quercia and Donatello, he finally emigrated to London in 1938, and died as a casualty of a German torpedo attack in 1940 on his way to the US. 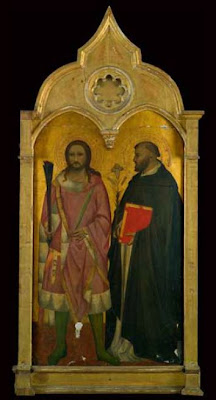 A previously unknown Italian Trecento panel painting went on display today at the Damjanich János Múzeum at Szolnok. The exhibition was opened by Mária Prokopp, Professor Emeritus at Eötvös Loránd University, a noted expert of early Italian painting. Dr. Prokopp provided the following information about the panel to the Medieval Hungary blog:
The panel was discovered in 2010 by the art historian of the Szolnok Museum, László Zsolnay, at the parish church of Kunhegyes. He was able to trace the history of the painting, which comes from a small chapel near Kunhegyes, at Tomajpuszta. This Neo-Gothic chapel has been erected by the Nemes family, and was completed in 1892. The Trecento panel was donated to the chapel around 1900. It stood there until 1945 - after which the chapel was sacked and fell into ruin. From the furnishings of the chapel, only this altarpiece was saved, which was taken to Kunhegyes and forgotten - until it was found by Zsolnay. On the back of the panel, there are two seals proving the legal export of the panel from Italy and its origin from Florence. It was established that the panel comes from the church of Santa Maria a Ricorboli in Florence. Ricorboli is now a suburb of Florence, just south of the Arno. The medieval church there was demolished around 1900, and its original furnishings were sold at the time, to raise money for the new church, built between 1906-1926 (which today still preserves a panel painting of the Virgin and child, attributed to Giotto and his workshop).

The panel painting is the right section of a large polyptych, in a modern (Neo-Gothic) frame, and depicts two saints. The one on the right, facing towards the center of the former altarpiece, is St. Dominic. The other saint is a knight, who has been tentatively identified by dr. Prokopp as St. Nemesius, while László Zsolnay proposes that he represents St. Sebastian (with a bunch of arrows in his hand). Other parts of the altarpiece have so far not been identified. It is quite clear that the painting comes from the circle or workshop of Andrea Orcagna, the leading master in Florence after the Black Death of 1348. Mária Prokopp proposed a possible attribution to Jacopo di Cione, while Angelo Tartuferi, curator of medieval art of The Uffizi attributed it to Giovanni del Biondo, when asked by Zsolnay (Tartuferi has since become the new director of the Galleria dell'Accademia). However, the current condition of the painting makes the task of attribution difficult.