The Church of St. Elizabeth at Kassa/Košice - Review of a monograph

In recent years, western scholars have shown a much welcome interest in the art of medieval Hungary. In the past the vast majority of studies were published by Hungarian scholars in Hungarian only, thus having little influence beyond the Hungarian-speaking world. Recognizing the problem, art museums in Hungary some time ago began publishing works in at least one other language besides Hungarian – a relevant case in point is the catalogue of the 2006 Sigismund-exhibition, published in German and French versions as well. Recently, more and more monographic works have been published in English or German – primarily by Hungarian, Slovak and Romanian scholars, but also in increasing number by people for whom this is not native territory. The most recent sign of this is the monograph of Tim Juckes on the church of St. Elizabeth in Kassa (Košice, Kaschau, SK), which is based on the author’s doctoral dissertation defended at the Courtauld Institute of Art, London. He has already published a number of studies about the subject, but now the results of his research are published by a major publisher in the form of a 292 page long monograph. Hopefully, this publishing activity – including the future work of Tim Juckes as well – will eventually lead to a point where this part of Europe will no longer be a terra incognita on the map of medieval Europe.

One of the challenges in Hungarian medieval art history is the fragmentary evidence. To get a clear picture a considerable amount of reconstruction is needed. The term “reconstruction” applies in every sense of the word, as much of medieval Hungary and its built heritage were obliterated by the occupation of a large part of Hungary by the Ottoman Turks in 1541. Even greater destruction took place at the time of the sieges of re-conquest in the seventeenth century and during the rebuilding and modernization that took place after. Although the Church of St Elizabeth in Kassa escaped the destruction of the Turkish wars, the original monument was all but obliterated during the late 19th century purist renovation. Thus even here, the first task of the art historian is to virtually reconstruct the original building – this time back to its true medieval stage, which was quite different from that constructed in 1877.

There is no question that the church of St. Elizabeth, the second building of the parish church of Kassa, is one of the most important surviving medieval churches in the Kingdom of Hungary. The importance of the church has been long recognized: it was the subject of the first book ever written on Hungarian medieval art: Imre Henszlmann’s 1846 study on the medieval churches of Kassa. When Henszlmann first wrote about the building, the late Gothic style of its construction period was seen as an aberration from the classical Gothic standards or, at best, as a preparatory phase for the Renaissance. This led to two mistakes: an early dating of the building which had very little to do with historical reality, and also a drastic rebuilding at the end of the 19th century, according to “true principles of Gothic architecture” (1877-1896). This view of late Gothic art changed only in the early twentieth century with the recognition of the autonomous development in Northern art and with the emergence of the concept of the Sondergotik in German-Austrian scholarship. At this time Kassa, which in 1920 ended up outside the borders of modern Hungary, also received more and more attention, as one of the better preserved medieval urban centres, by both Hungarian and Slovak scholars.

However, the period of King Sigismund (1387-1437) did not enter the focus of research until 1937, when Henrik Horváth completed the first extensive intellectual and artistic history of the age of Sigismund. After World War II, large-scale excavations and reconstruction work carried out in medieval towns such as Sopron and Buda demonstrated the cross-border connections that existed between various Central European centres. Examples include the role of members of the Prague Parler workshop on the church of Our Lady and the royal castle at Buda, or the influence of Viennese ateliers in towns in north-western Hungary like Pozsony [Bratislava, SK] and Sopron. It was only in the 1970s-80s that the importance of the Sigismund period was truly recognized. At that time, more and more attention was paid to the Kassa’s international connections as well. Although the church and its history has been the subject of a lot of research, the medieval building of the church has never been the subject of a monograph until the present work by Juckes. Closest to a monograph is the series of studies by Ernő Marosi, which, however, never appeared in a book form. The selection of this topic by Juckes – likely suggested by the advisor of his dissertation, Paul Crossley – is thus much welcome. 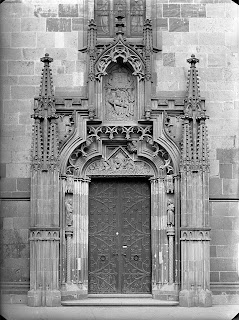 In this new monograph, Tim Juckes first surveys the documentary evidence and the historiography of the church of St. Elizabeth, before embarking on a new analysis of the building and its history. The structure of the book is clear and logical: it helps us to understand the medieval building, virtually restoring it from beneath the layers of 19th century transformations. The first chapter provides an overview of the 19th century rebuilding of the church as well as a brief survey of previous scholarly literature and opinions on the structure. After this the time machine is turned on, and we travel back to the 14th century, to study the history of the town and its parish church, based on a careful analysis of written sources, urban topography, patronage and building lodge. We then start to move forward, following the chronology of construction.