I am currently writing a conference paper on Flóris Rómer, one of the founding fathers of Hungarian art history. Flóris Rómer was born 200 years ago, in 1815, and filled numerous important positions during his illustrious career. He became active in the field of archaeology and art history in the 1860, and published the first survey of medieval wall painting in Hungary in 1874. The book, which is in the focus of my study, is a beautifully illustrated, monumental work, published by the Archaeological Committee of the Hungarian Academy of Sciences.

In the book, Rómer discusses over 100 medieval monuments with wall paintings, but the main focus is the work of Johannes Aquila, which Rómer effectively discovered in 1863. At that time, he was called by Imre Gozón to examine an abandonded medieval church in western Hungary, in the village of Velemér. The church had no roof or vaulting, but its walls were covered by a wonderful series of wall paintings. Surprisingly, Rómer also found a self-portrait of the painter as well, who called himself Johannes Aquila. The date of the frescoes was also recorded in an inscription: 1378. Rómer also found the frescoes of Johannes Aquila in the nearby church of Turniscsa (Toronyhely, Bántornya, now Turnišče in Slovenia): here he identified the legend of St. Ladislas in the frescoes located in the attic space, above the Baroque vault covering the nave of the church. Another fresco cycle of Johannes Aquila - again with his selfp-portrait, and dating from 1392 - was found at Mártonhely (Martyáncz, now Martjanci in Slovenia). Rómer also attributed the frescoes in the rotunda of Nagytótlak (Selo, Slovenia) to Johannes Aquila.
At the instigation of Rómer, Ferenc Storno made a set of color copies of the wall paintings, which were published in his 1874 monograph, and are still indispensible tools of research. Quite coincidentally, a series of these copies are currently exhibited at Műcsarnok (Kunsthalle Budapest), which is normally a place of contemporary exhibitions. The Johannes Aquila exhibition is part of an interesting mix of exhibitions, called the Slovenian connection, which are accompanying an exhibition of contemporary Slovenian painting. Whatever the reason, the Műcsarnok displays not only Storno's original notebook and sketches, but also the much more detailed large-scale copies executed by István Gróh in 1903 and 1912. These include watercolour copies, as well life-size replicas of the St. Ladislas cycle at Bántornya. In addition, the exhibition also includes a large-scale model of the interior of the church at Velemér, imagined and reconstructed at the stage when Johannes Aquila began his activities there, with the painting of the Adoration of the Magi. The curator of the exhibition is Terézia Kerny, who published a book on Johannes Aquila a few years ago (the current show is accompanied by a brief - but bilingual - booklet about the painter).

The monograph of Flóris Rómer has been digitized both by Google and the Bayerischen Staatsbibliothek. The original book contains a number of large, fold-out plates, and the digitized versions cannot replicate this. Knowing the limits of the Hungarian language, Rómer also published the first part of his book - that dealing with Johannes Aquila - in German in volume 19 of the Mittheilungen der k.k. Central Commission zur Erforschung und Erhaltung (1874), as "Kirchliche
Wandgemälde des XIII. und XIV. Jahrhunderts in der Eisenburger Gespanschaft" (pp. 201-215).

"Johannes Aquila .... by his hands..." - The Slovenian Connection, on view at Műcsarnok-Kunsthalle Budapest until September 29, 2015.

Some of my photos of the paintings of Johannes Aquila - along with other photos of medieval wall paintings in Slovenia - are available in my album on Flickr. 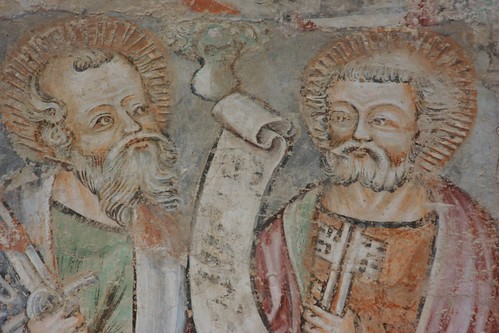 Art and Architecture around 1400 Conference 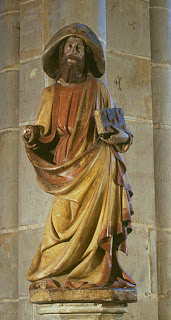 As Medievalists around the US (the world?) are gearing up for this year's Medieval Congress at K'zoo, yours truly will drive over to neighboring Slovenia, to participate at the CIHA Colloquium at Maribor, titled Art and Archicture around 1400: Global and Regional Perspectives. I've gotten to like these more focused conferences, as discussions often tend to be livelier. The conference was organized by the University of Maribor, and by the Slovene Art History Society, under the auspices of a really distinguished Program Committee.
The six-day program of the conference is quite rich, with a number of interesting excursions aside from the talks, for example to see frescoes by the workshop of Johannes Aquila.

Naturally, there will be a sizable Hungarian delegation at the conference, and a lot of Hungarian medieval topics will be treated in lectures and posters. A conference report with pictures will likely appear on this blog some time later. For now, a number of pictures of Slovenia's rich Gothic heritage can be seen in this gallery (the statue of St. James to the left is from the pilgrimage church of Ptujska Gora).


Update:
Gothic frescoes in Slovenia, photos from earlier this week on Flickr http://t.co/FoOXlx2

Update2:
The website of the conference above is no longer available, so the links above don't work any more.

New book on the frescoes of Johannes Aquila 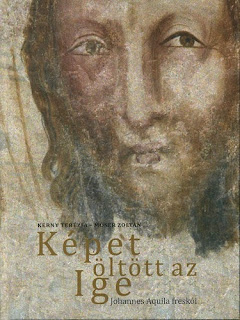 Johannes Aquila was a painter from the town of Radkersburg in Styria, working in the last quarter of the 14th century. Frescoes by him (or by his workshop) survive in altogether five churches in the area which used to be the border region of Styria and Hungary. Today two of those places: Mártonhely (Martjanci) and Bántornya (Turnisce) are in Slovenia. His earliest known work is in the small church of Velemér, dating from 1378. Latest works of Johannes Aquila's workshop are closer to his hometown in Austria:  at the church of the Augustinian hermits in Fürstenfeld. One interesting secular fresco cycle at Radkesburg was also painted by the workshop (at the Pistorhaus). The style of his workshop is characterized by a mixture of Italian and Bohemian elements.


Johannes Aquila is most famous for not only signing his work, but also for painting his self-portrait. The self-portrait can be seen next to his signature, in a praying position (similarly to depictions of patrons) both at Velemér (1378) and at Mártonhely (1392). These are regarded as the oldest European self-portraits by a painter, and you can read more about in an article by Daniel Spanke (Spanke, Daniel, "Die ältesten Selbstbildnisse Europas? Zur Bedeutung der Malerdarstellungen Johannes Aquilas von Radkersburg in Velemér (1378) und Martjanci (1392) für eine Frühgeschichte des Porträts," Zbornik za umetnostno zgodonivo 34 (1998), 141-159, available in a pdf format).

A new book has just been published on this highly important painter, written by Terézia Kerny with photographs by Zoltán Móser (Kerny, Terézia - Móser, Zoltán: Képet öltött az Ige - Johannes Aquila freskói. Budapest, Kairosz, 2010). The book will be presented by Mária Prokopp on Tuesday, January 25 at Litea Literature & Tea Bookshop. The book is in Hungarian, but hopefully will be published in other languages as well.

I cannot post my own photos of the frescoes here, because the last time I visited these churches I still used slides - and those have not been scanned yet. To the left, you can see the self-portait of Johannes Aquila from Mártonhely (Martjanci), and you can find several other photos online, especially of Velemér:

Photos of the church, with Quicktime virtual reality views of the interior; more photos at the Fine Arts in Hungary website.

For more photos, visit the IMAREAL database of the Institut für Realienkunde des Mittelalters at Krems (search for Künstler: Johannes von Aquila [um 1400 tätig], or for Standorte: Turnisce and Martjanci. Does not seem to work in Chrome).