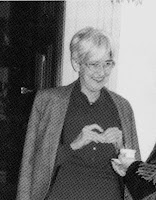 Art historian Melinda Tóth passed away in January 2013, at the age of 74. Melinda Tóth spent a lifetime researching Hungarian Romanesque art and was one of the leading scholars of the field. She worked until her retirement at the Art History Research Institute of the Hungarian Academy of Sciences. Her research concentrated on two fields: Romanesque sculpture and Romanesque wall-painting, in the territory of the Kingdom of Hungary. She was the author of the most recent monograph on wall-painting in Hungary in the Árpád-period (1974, a revision in the form of an article was published in 1995). In the field of Romaneque sculpture, she concentrated mainly on the study of Pécs cathedral. It was largely due to her efforts that the magnificient stone carvings from the medieval cathedral found a permament home in the new cathedral museum, which opened in 2004. Unfortunately, the catalogue of the carvings and the accompanying study on the cathedral sculptures was not finished until the death of Melinda Tóth. However, she published numerous studies on the subject in various journals and exhibition catalogues. I could not find a bibliography of her works online, but a query in Kubikat gives good results.


I had a chance to work together with Melinda Tóth at the mid-1990s, when she worked on the survey and cataloguing of the Pécs sculptures. This material was at the time kept at an abandoned movie building in a village in the hills above Pécs. The situation there was so appaling that even the World Monument Fund was alerted. Restoration of the pieces then began with their support. However, it took another ten years for the new museum to be built according to the plans of Zoltán Bachman.


My Hungarian-speaking readers can read a new study on Pécs cathedral written by Gergely Buzás, and made available online in memory of Melinda Tóth. I also wrote about Pécs cathedral in a previous post.
Posted by Zsombor Jékely on 2/24/2013 No comments: