There are several international journals dedicated to medieval art, just as there are many dedicated to Hungarian art historical research. In this post I would like to call attention to two journals which may be not as widely known, but both of which contain a large number of important studies about medieval Hungary, among other topics. As such, they are both highly recommended for anyone interested in latest research in this field. Both journals celebrate important anniversaries this year, with the publication of volume 20. As this number shows, both journals started after the fall of Iron Curtain, and represent the increased scholarly connections of East-Central Europe with western scholarship in medieval studies. I will briefly introduce both journals and their anniversary issues below. 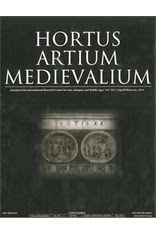 As the publisher informs us, Hortus Artium Medievalium is the annual journal of the International Research Center for Late Antiquity and Middle Ages (Motovun, Croatia), established in 1993 (IRCLAMA). The journal has a particular interest in studying artefacts for the history of art, and to study the period from Late Antiquity to the end of the Gothic period in an interdisciplinary, international and diachronic fashion. An annual colloquium gathers appropriate specialists, from which the papers are drawn. The journal is edited in Zagreb, by Miljenko Jurkovic, whose work is supported by an international editorial board and an advisory board. The high level of the publication is also ensured by Brepols Publishers. The strongest focus of the journal is on the Late Antique and Early Medieval period, as well as on the Mediterranean area, but there are also articles on other subjects. Among these there are also a large number of articles on Hungarian subjects. Articles are published in Italian, French, German and English, depending on the subject matter and the author.

The 20th anniversary issue starts with an overview of 20 years of IRCLAMA, after which a number of thematic units follow. The volume is so large, that it was split into two parts by the publisher: volume 20/1 is 428 pages, while volume 20/2 stretches from page 429 to page 886. The thematic groups are the following:
There are close to 100 articles in this double issue, if we count the introductory texts to each thematic units, and the studies are authored by a wide range of international scholars. There are also a number of book reviews. The journal is also made available online by Brepols, by subscripton (although some introductory texts are freely available). Here you can also browse older issues, which can also be ordered from the publisher. 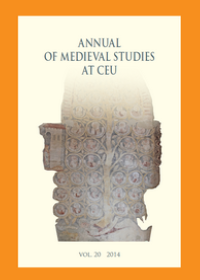 The Department of Medieval Studies at the Central European University is an interdisciplinary center of postgraduate education and research located in Budapest. It gathers students from all over in Europe who are interested in studying the medieval past. The volumes of the Annual of Medieval Studies at CEU offer a series of articles on various aspects of the history of medieval Central and Eastern Europe and gives an overview of the articles of the department in the academic years. The journal is a very important forum for new research by young scholars in Central Europe, while also publishing articles by leading researchers of the period. The journal is interdisciplinary, and has a very strong focus on Eastern and Central Europe. Volume 20 of the annual celebrates 20 years of Medieval Studies at CEU. Like every year, there are a number of art historical studies in the journal - this time among other things on my favourite subject, medieval wall painting in Transylvania (by Anna Kónya).

Contents of new issues are generally listed on the department's website, but the journal is also freely available online, although the last five years are always password-protected.

I would like to call attention to two (actually, three) Hungarian online journals, dedicated to archaeology. The first one is directly relevant to the topic of my blog, as it generally deals with medieval archaeology. Titled Archaeologia - Altum Castrum Online, the magazine is published by the King Matthias Museum at Visegrád, a branch of the Hungarian National Museum. The magazin is edited by Olivér Kovács, and it is coordinated by the director of the museum, Gergely Buzás. The articles report on interesting new discoveries in the field of medieval archaeology, and there is section where longer studies are also published - generally in nicely formatted PDF-files. The only problem is that content is only available in Hungarian. The magazine works together with another online portal, the Hungarian-language műemlékem.hu. This site is a one-stop starting point for getting information on historic monuments in Hungary, complete with user-submitted information, and informative magazine-section and a project focusing built monuments in the Carpathian basin, outside the borders of modern Hungary. The editor of this portal is also Olivér Kovács, who must be quite busy, I imagine. The two websites mentioned so far are important sources of information for the Medieval Hungary blog as well. 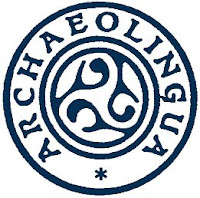 The other new e-journal is titled Hungarian Archaeology, and is published by Archaeolingua Foundation, the premier Hungarian publishing house in the field of archaeology. This quarterly journal is published both in Hungarian and English editions, and contains a wide range of studies dedicated to all periods. It is a forum to spread information not only on archaeological research in Hungary, but also on the work of Hungarian researchers working at excavations in various parts of the world. Naturally, there are articles in almost all issues dedicated to medieval subjects. The e-journal is currently in its second year: so far 6 issues have been published online. You can read more about the goals of the publishers and editors here. Go ahead, and browse the journal - you will surely find something interesting!

More and more journals are available in an open access format on the web - and more and more are only published in this format, without a printed version. The advantages of speedy publication at a lower cost are obvious, and the publications can potentially reach a much larger audience. Editorial work and peer-review can of course be maintained for online publications just as for traditional outlets.
When it comes to medieval art, there is a generous selection of such journals on the web, to supplement such print (+ restricted online access) journals as Gesta. What follows is a selection of such journals, with a brief description lifted from the introductory pages of the respective journals.

Peregrinations: Journal of Medieval Art and Architecture
Peregrinations is published by the International Society for the Study of Pilgrimage Art, which was founded in 2000 to bring together scholars who explore the art and architecture of pilgrimage in the late Middle Ages. The journal "provides a forum for themes and topics related to that subject, and to share current research. [...] The artistic expressions which were created to give form to the cults are the objects of our investigation.
The journal is edited by Sarah Blick, and the latest issue is Volume 3, Issue 1 (2010). The journal also maintains a photo-bank.

Different Visions: A Journal of New Perspectives on Medieval Art
The journal is "a web-based, open-access, peer-reviewed annual, devoted to progressive scholarship on medieval art. Different Visions seeks to fill a significant gap in current publishing venues by featuring articles employing contemporary postmodern and poststructuralist theoretical frameworks to examine medieval visual culture. Authors are encouraged to explore the application of such approaches as feminist and gender analysis, historiography, semiotics, post colonialism and queer theory to works produced during the period from the fourth through the fifteenth century. The journal will also consider essays on medieval visual culture that emerge from multiple disciplinary perspectives." The editor-in-Chief of the Journal is Rachel Dressler, and Issue Two is the most latest on the site.
Read more »
Posted by Zsombor Jékely on 4/17/2011 No comments:

During the last year or so, most publications of Hungarian museums have been digitized by the company Arcanum. The database can be reached from the central information portal of Hungarian museums, MUSEUM.HU. The publications range from historical reviews to archaeological and art historical journals. All journals as well as many catalogues (900.000 pages total) have been made accessible in a central database. The website and the database are in Hungarian, but many of the journals and books themselves are more accessible, as they are often in English or German.


Unfortunately the interface is extremely cumbersome (I've been using JSTOR and similar databases for many years, so I know that it is possible to do this kind of job well). While the site has a powerful full-text search engine, it is difficult to browse through publications. New windows keep popping up and every page is in a separate pdf file. There does not seem to be a way to provide direct links to publications (well, you can link to them, but the results won't load), and you cannot download PDF versions of full articles. Another problem is that several digitized volumes are not accessible, as some museums did not allow the online publication. However, these have also been built into the database, so references to them will appear in search results - but you will not see them (this is the case with many publications of the Museum of Fine Arts and the Hungarian National Gallery).
The resource can still come in handy if you need to look something up in the Journal of Veszprém County Museums or if you need to find a quick reference about a specific place of monument. The database contains nearly all the publications of Hungarian county museums, and the journals and some catalogues of large state museums.

If you are brave enough to navigate a Hungarian-language database, you can find several important publications. These include for example catalogues of medieval goldsmith and bronze objects at the Hungarian National Museum. For these, scroll down on the opening page to "Magyar Nemzeti Múzeum" to find "Catalogi Musei Nationalis Hungarici. Seria Archeologica", and these volumes there:


Of museum journals, Ars Decorativa, published by the Museum of Applied Arts (you can find it as "Iparművészeti Múzeum") contains studies on the decorative arts in English, German, and French.
For medievalists, the publications of the Monument Protection Office ("Kulturális Örökségvédelmi Hivatal") are also very useful. They are generally in Hungarian, but with summaries in foreign languages.


A similar database has been prepared from the publications of the Hungarian National Archives, which include numerous medieval source editions.