On the trail of St. Elisabeth in Marburg 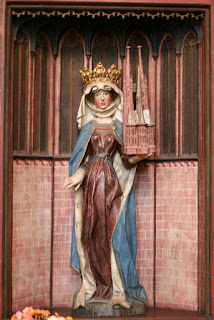 A few weeks ago I had a chance to walk around Marburg, the burial place and the center of the cult of St. Elisabeth of Hungary. Elizabeth was the daughter of King Andrew II of Hungary, of the Árpád dynasty and his wife Gertrude, from the family of the Counts of Andechs-Meran. In 1211, the four year old Elisabeth was taken to the Thuringian court, to be raised with his intended husband, Hermann of Thuringia. Soon after she left (in 1213), her mother was killed by rebellious Hungarian lords. As Hermann passed away as well, Elisabeth in the end was married to his brother, Ludwig (in 1221). The couple had three children, but Ludwig passed away on a crusade in 1227. By this time Elisabeth started following Franciscan ideas of poverty, and was strongly influenced by the ascetic Master Conrad of Marburg. In 1228, in the Franciscan house at Eisenach Elisabeth formally renounced the world, and became one of the tertiaries in Germany. In the summer of 1228 she built the Franciscan hospital at Marburg and then devoted herself entirely to the care of the sick. She passed away in 1231, at the age of only twenty-four.

Her ascetism, her charitable acts as well as many miracles at her gave quickly led to her canonization (1235), and one of the most beautiful Gothic chruches in Germany was soon built over her grave in Marburg by the Teutonic Knigths. Elizabeth became one of the most popular female saints of the entire Middle Ages, venerated especially in Germany, Hungary and Italy. You can read more about her life in the Catholic Encyclopedia, and you can read her legend as it was incorporated into the Legenda Aurea. Medieval images of her and her legend also abound in these regions. 2007 marked the 800 birthday of Elisabeth, and was marked by a series of exhibitions and events, the largest of them being the Landesausstellung at Wartburg. As I think both her life and the images depicting her are quite well-known, I will not go on about this subject - the purpose of this post was to share some images I took in Marburg, especially in the Elisabethkirche. You can see these below.