Miklós Mojzer, the former director of the Museum of Fine Arts, passed away last weekend in the 83rd year of life (1931-2014).
Miklós Mojzer was an outstanding scholar of medieval and Baroque art. Born in 1931, he had studied in Budapest, and began his career at the Christian Museum in Esztergom. In 1957, he started working in the Museum of Fine Arts, in the collection of Old Hungarian Art, in the department headed by Dénes Radocsay. In 1974, when the medieval, Renaissance and Baroque works of Hungarian Art - the Old Hungarian Collection - was trasferred to the Hungarian National Gallery, he went with the collection, and soon became head of the department (1977-1989). In this period, he supervised the creation of the most important exhibitions of old Hungarian art, including the magnificent exhibition of late medieval altarpieces in the former throne room of the Hungarian royal palace, home of the National Gallery. In 1989, Miklós Mojzer became the director of the Museum of Fine Arts, where he served three terms, until his retirement in 2004. He was a true museum expert, familiar with technical details of historic paintings, exhibition organization and publications, and above all, always a true gentleman.

As a researcher of medieval art, Miklós Mojzer mainly researched and published on late medieval panel painting. His bibliography was compiled for the 2011/2 volume of Művészettörténeti Értesítő, which was a Festschrift published for his 80th birthday (another bibliography was compiled at Museum of Fine Arts). An earlier Festschrift, published by the National Gallery for his 60th birthday, is available online in the Hungarian Digital Museum Library. A subject he had dealt with most recently was the painter known as Master MS, creator of a highly important altarpiece at Selmecbánya (Banská Štiavnica / Schemnitz, SK) at the beginning of the 16th century. This was a subject which occupied him over and over for decades.

To get to know more about Master MS, you can also have a look at this overview on the Fine Arts in Hungary website, but the best place to start is the bilingual exhibition catalogue published by the National Gallery in 2008. Miklós Mojzer naturally wrote the introductory study to this catalogue, but the results of his research concerning the identity of the painter were only published later, in a two-part article (the second part of which is available online). In this complex study he calls attention to the painter known with various names, but generally as Marten Swarcz, who had arrived to Cracow in 1477 along with Veit Stoss in order to work on the main altar of the Church of the Virgin Mary. Mojzer proposed that this painter can be identified with Master MS, and he must have been in Selmecbánya by 1506 to work on the altarpiece, from which today seven scattered panels are known (see the Visitation at the Hungarian National Gallery in high resolution). His research opened up new avenues in the study of this outstanding late Gothic master.

Miklós Mojzer will be buried in Esztergom, on September 5, 2014. May he rest in peace. 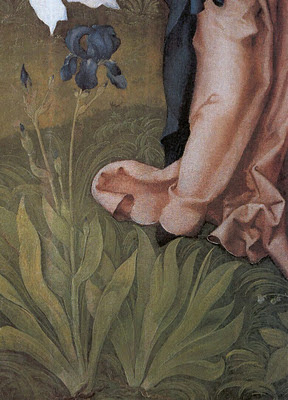 It is a long-standing tradition in Hungary's major art museums to celebrate on St. Nicholas's day: it is the name day of Miklós Mojzer, the doyen of Hungarian museologists, retired director of the Museum of Fine Arts. Yesterday a special celebration was held in his honor at the Hungarian National Gallery - the 80 year old Mojzer was honored by a special issue of Hungary's prestigious art history journal, Művészettörténeti Értesítő. Miklós Mojzer worked in all of Hungary's museum with major holdings of Old Masters: he started his career at the Christian Museum of Esztergom, and then worked at the Old Hungarian collection of the Museum of Fine Arts. When in 1974, this collection joined the rest of the Hungarian National Gallery in its new building - the former royal palace in Buda castle - Mojzer went with the collection, and became its head from 1977 to 1989. In this period this collection - encompassing works of  Hungarian and Central European art from the 11th century to the Late Baroque - became one of the most significant such ensembles of the region. To get a glimpse of the relevant artwork, you can browse the website of the museum - the first four groups on this page of collection highlights belong to the Old Hungarian Collection. In this period, Mojzer was also the editor of Művészettörténeti Értesítő, the journal of the Association of Hungarian Archaeology and Art History.

From 1989 until 2004, Miklós Mojzer was the director of the Museum of Fine Arts, leading this institution into the 21st century by starting the reconstruction and underground expansion of the museum, and organizing a series of highly important exhibitions. The collections of the museum were also greatly expanded during his tenure. Miklós Mojzer remained active after his retirement, publishing a number of important articles - including ones dedicated to his lifelong research-interest, Master MS. His findings will be the topic of another blog post - it is enough to say now that Mojzer proposed a solution to this enigmatic master of late Gothic paintings, whose chief works are at the Christian Museum and at the Hungarian National Gallery (the latter providing the sole illustration to today's post). A selection of his publications is listed in the Kubikat catalogue.

The new issue of Művészettörténeti Értesítő contains studies from the general field of research of Mojzer: studies on late medieval altarpieces, on Hungarian medieval painting and sculpture, on Renaissance and Baroque painting and similar subjects. Edited by Anna Jávor and Árpád Mikó, the studies in this special issue were written by the best Hungarian researchers in these fields, many of whom had worked together with Miklós Mojzer for many years. I would like to wish him many more productive years and a long life!