This post has nothing to do with the art of medieval Hungary, but the information presented below is so fascinating that I decided to create a small post about it. New started circulating this week about the discovery of some spectacular medieval paintings, which had been hitherto unknown. The most famous discovery concerns a small panel attributed by Cimabue, which was found hanging in the kitchen of French woman. The painting will be auctioned by Acteon in Senlis on October 27, with an estimate of 4 to 6 million Euros.
The small panel depicts the Christ being Mocked and was identified as part of a dismembered small altarpiece. Its reconstruction shows a diptych, with four small panels on each wing. So far, two other paintings of the left wing have been known: the Virgin and Child Enthroned with Two Angels at the National Gallery, London and the Flagellation of Christ at the Frick Collection. The two panels have been exhibited together at the Frick Collection in 2006. The newly identified painting dates from around 1280, along with the dismembered former altarpiece. 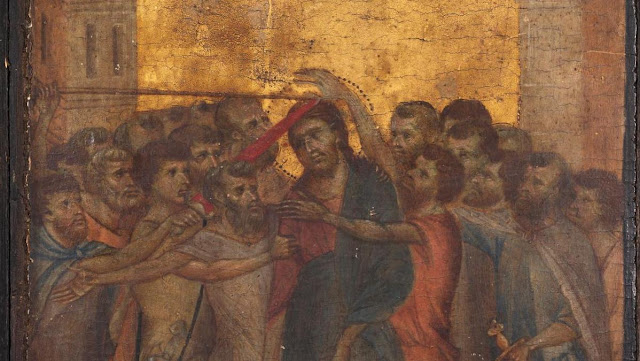 Also discovered in France, the second painting originates from Central Europe. It is a small panel of the Virgin and Child, attributed to one of the most famous - but anonymous - masters of medieval Czech painting, the Master of Vyšší Brod. Active in the middle of the 14th century, the master received his name from the altarpiece now preserved in the National Gallery in Prague. The background of the small panel has been repainted but could be cleaned and restored by a potential buyer (see the image in the article in La Tribune l'Art). The painting will be offered for sale by Cortot & Associés in Dijon, on November 30, with an estimate of 400.000 to 600.000 Euros.
For more information, see for example La Gazette Drouot.

Hungarian silver on sale in NYC

About 30 precious silver and goldsmith works from Hungary and Transylvania will be auctioned off at Christie's New York tomorrow (17 May 2011). (Sale 2447: Important English, Continental and American Silver and Gold). The pieces in question are all Renaissance and Baroque works, mainly dating from the 17th century. Before WWII, the objects all belonged to the Herzog collection. The collection of Baron Mór Lipót Herzog, a wealthy Jewish magnate in Budapest was one of the largest of its time in Hungary, which got largely dispersed during the war. The silver objects in the collection were last fully documented in a 1930 inventory, and most of the pieces were on view for the last time at various exhibitions at Budapest's Museum of Applied Arts at around that time. The pieces have been recorded as wartime victims of looting, and their whereabouts were unknown until this sale.
The New York Times also wrote on the sale, and has this to say about the provenance of the objects, based on a telephone interview with the anonymous seller: "a Herzog family member had managed to bring the pieces to New York at some point. The family had long kept them in storage."
You can browse the objects on the website of Christie's, where a full e-catalogue and a slideshow of objects is also avaliable. When browsing the auction catalogue, the lots in question go from Lot 99 to 127 + lot 132.
Many objects from the Herzog collection are of course embroiled in restitution cases. Record-setting pieces, like the recently restituted portrait of Sigismund Baldinger by Georg Pencz have come to the market from the collection (Christie's sale 7862 of last year). Currently there is a major lawsuit going on, as heirs of the Herzog family sued the Hungarian state for objects kept in various Hungarian public collections. The emergence of these Hungarian silver objects among these circumstance is definitely most interesting.

Nevertheless, after the best pieces of the Salgó collection entered the Metropolitan Museum, it would be nice to see these pieces stay together as well, and - preferably - enter a public collection.
Posted by Zsombor Jékely on 5/16/2011 5 comments: