A new, long-missing section of the permanent archaeological and historical exhibition of the Hungarian National Museum opened yesterday. The exhibition - which is the continuation of the rooms dedicated to the history of Hungary from prehistory to the Migration period - is focusing on Hungary during the 9th and 10th centuries, and consists of two parts. The first part is dedicated to the 9th century, especially to the western, Transdanubian region - the area of the Roman province of Pannonia - which was part of the Carolingian empire. The exhibition displays for the first time a large selection of the sensational discoveries made at the Zalavár excavations. Finds from the churches and palaces of this important late Carolingian center - including some of the oldest stained glass fragments from Europe, as well as a complete bell foundry - make up perhaps the most interesting part of the new exhibition. The second part contains objects from the period of the Hungarian (Magyar) Conquest of the Carpathian basin, and finds from the 10th century, the period before the formal establishment of the Christian Kingdom of Hungary.

Taken together with the preceding part of the exhibition, this is the largest archaeological exhibition in Hungary, and one which is also quite informative and well-installed. Monitors with 3D-reconstructions and other interactive elements make the exhibition even more interesting for younger visitors as well. Ágnes Ritoók of the Hungarian National Museum acted as chief curator of the project, coordinating the work of two teams. This new exhibition is accompanied by two separate publications: one, written by Béla Miklós Szőke, is dedicated to Zalavár and the Carolingian period in Hungary, the other - the work of László Révész - is about the Conquest period. Both books were also published in English - so you can expect to read more about them on this blog soon.

The website of the National Museum has some technical problems, so I am linking here to the Facebook page of the Museum. The photos in this post come from there. 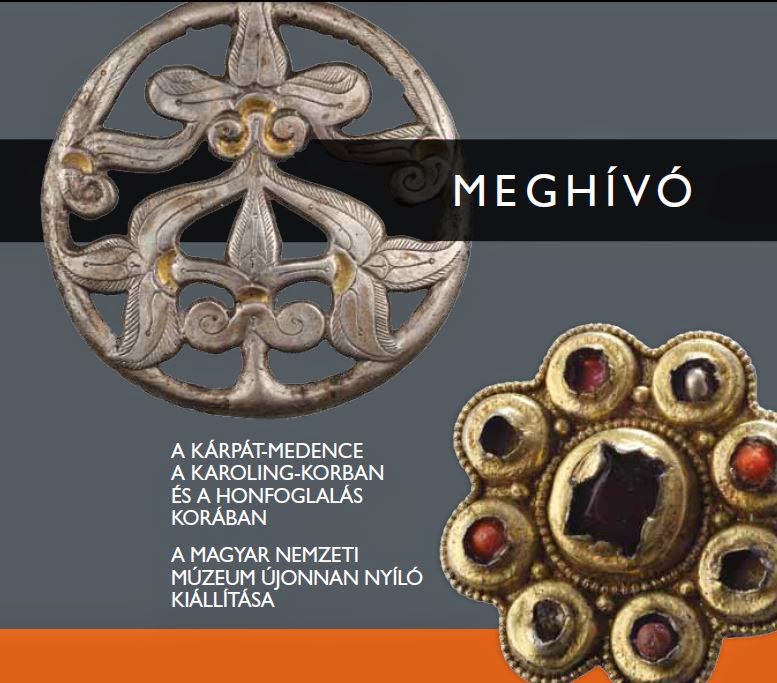 The area of Zalavár in western Hungary has long been one of the most interesting archaeological sites of medieval Hungary, especially for the Carolingian period. The area has been idetified with Mosaburg, where the Slavic prince Pribina established himself around 840, after he was expelled from Nyitra (Nitra, Slovakia). Lands in the area were granted to him by Louis the German. The first church there was dedicated by Liutprand, archishop of Salzburg in 850. Several other churches have also been documented there. In the late 9th century, Arnulf of Carinthia had his seat there, before he became Holy Roman Emperor at the end of his life. This late Carolingian flourished until the time of the Hungarian (Magyar) conquest of the Carpathian basin, including the area of Pannonia. Later, in 1019, King St. Stephen established a Benedictine abbey at Zalavár, and by the 12th century, a new castle was established there. The settlement - including the castle and the churches - became largely abandoned during the Ottoman Turkish occupation of Hungary, and after the reconquest, in 1702, the remaining buildings were torn down.

Archaeological excavations of the past decades, however, have brought many interesting remains to light. The sensation of the previous decade was the excavation of the third church of Mosaburg, the pilgrimage church dedicated to Saint Hadrianus, established in 855 (the conserved foundations walls of the church can be seen above). Several interesting finds, including fragments of stained glass windows were found here.

Reports from this summer's archaeological season indicate that the remains of a Carolingian stone palace have been found at the site of Mosaburg. As the online magazine műemlékem.hu reports, archaeologists have found the corner of a large, rectangular stone building. Béla Miklós Szőke and Ágnes Ritoók, archaeologist in charge of the excavations identified the remains with the foundations of the palace of Arnulf, and thus date it to the last quarter of the 9th century (Arnulf died in 899, after becoming Holy Roman Emperor in 896. These are also the years of the Hungarian Conquest). Research still has to continue - it is hoped that by next summer, the full area of the Carolingian palace can be excavated.

You can find more aerial photos of the area on the website of Civertan.
More information about the history of Zalavár and its churches is available on the website of the Zalavár Historical Memorial Park.
For more of the historical and ecclesiastical context, you may want to read the following studies: