Gallery of Medieval Art at the National Museum in Warsaw

The National Museum in Warsaw (MNW) has one of the largest collections of medieval art in the region, which has been on view in a new installation since the end of last year (the gallery opened on December 11, 2013). Last week I finally had a chance to spend again a few days in Warsaw, and went to see the exhibition. Then I went back for a more detailed look - there is so much to see that one visit is definitely not enough. The exhibition is located on the ground floor of the museum, and takes up about 800 square meters in three large halls. These rooms are full of the best of late medieval art from the territory of modern Poland, while also include a few other works from other parts of Europe.

The first room provides a rather dramatic entry for the entire exhibition. It is a wide hall, where two lines of statues divide the room as if in a three-aisled church, and at the center, directly opposite the entrance is one of the largest altarpieces in the museum. The dark environment contributes to the church-like feel of the hall. This first room displays the earliest works in the collection, including Romanesque sculpture, as well as what is called  the Inter-regional Art of Northern Europe in the 14th-15th centuries. There are a number of French and German statues here, but the most important works come from the territory of Silesia - which at the time was a possession of the Crown of Bohemia. The international connections are also illustrated by such works as the carving of Three Marys from a Crucifixion-group, carved in alabaster by the Rimini Master, and coming from a church in Wroclaw.
Among a number of late Gothic statues stemming from Wroclaw (Breslau), one can also admire the famous Beautiful Madonna from Wroclaw - made either there or in Bohemia at the end of the 14th century. The large altarpiece in the center of the arrangement comes from Grudziadz (Graudenz) in Pomerania, from a chapel of the Teutonic Knights. It is one of the most refined painted altarpieces of the International Gothic Style, dating from 1390 (or maybe somewhat later). The installation enables one to study all the paintings on the altarpiece, including the Passion-scenes of the first opened stage of the altar, and the Life of the Virgin scenes on the fully opened altar. Other works in the room - originating from Gdansk (Danzig) round out the rich demonstration of the International Gothic.

The next section of the exhibition (in the second, long exhibition gallery) focuses on Wroclaw and Silesia at the middle of the 15th century, with the St. Barbara Altarpiece from 1447 as the main work here. Proceeding chronologically, the next highlight is the Polyptych of the Annunciation with the Unicorn, a wlarge altarpiece from around 1480. As the visitor turns and enters the third long room, artworks from Silesia dating from the the decades around 1500 can be studied, among them the unpainted limewood relief of St. Luke Painting the Virgin by Jakob Beinhart. This sophisticated carving, based on a woodcut by Veit Stoss, demonstrates the very high level of artistic achievement in Wroclaw at the end of the 15th century.

The main altar of the church of Kisszeben (Sabinov, Slovakia) is on view again at the Hungarian National Gallery in Budapest. The altarpiece has not been put together since WWII - during the last few years, only parts of it were visible in the permanent exhibition of the Hungarian National Gallery. A restoration project of several decades has come to an important milestone, when the central shrine of the altarpiece, as well as the paintings of a pair of movable wings were assembled and put on display. There is still work to be done (including the restoration of the superstructure), which is expected to be completed by next year - but for the first time in 70 years, visitors can appreciate the size and beauty of this whole winged altarpiece.

As part of a coordinated campaign to transfer medieval altarpieces in museum collections at the time of the Hungarian millenium, the altars of Kisszeben were transported to and exhibited in the newly built building of the Museum of Applied Arts. In addition to the main altar, this included two side altars from the same church. By the 1920s, the altarpieces were transferred to the Museum of Fine Art, where the main altar was put on display in the Marble Hall of the museum. During the war, the altar was dismantled and put in storage, suffering serious damage. It was transferred to the Hungarian National Gallery along with the rest of the Old Hungarian Collection in 1974. The restoration of the altarpiece commenced already in the 1950s, and continued in the National Gallery. Some of the restored parts of the altar - including the central statues - have been on display along with similar works of art for some time. Last week, the assembled altarpiece was formally put on display in the same gallery. In addition to the central part of the altar and one set of the wing paintings, several other paintings from the Life of St. John and the Life of the Virgin cycles are also on view. Moreover, statues originally in the superstructure of the altar can also be seen.

Update: link to a better photo of the whole altar. I should also mention that the two side altars from the church - one with the Annunciation and another dedicated to St. Anne - are also on view in the same room of the Hungarian National Gallery.

After the London exhibition of the Liechtenstein collection was canceled, plans were quickly made to fill the void with an exhibition based on the holdings of Hungary's premiere art museum, the Museum of Fine Arts (Budapest). An article in the Guardian (15 May 2010) gives one some idea about the selection process: when the show's curator, David Ekserdjian inquired about the possibility of including a Leonardo drawing in the show, the response from Budapest was: "Why don't you have two." In addition to important pieces from the Museum of Fine Arts, several objects will be included from the Hungarian National Gallery, the museum dedicated to the history of Hungarian art. The result will be: Treasures from Budapest: European Masterpieces from Leonardo to Schiele (25 September, 2010 - 12 December, 2010).

Little if any art historical significance can be expected from such exhibitions - although in addition to providing viewing pleasure to their public, they presumably draw some attention to Hungary and the rich artistic collections of the country. In this context it was quite surprising to learn, that one of the pieces included in the upcoming exhibition is a complete medieval winged altarpiece, the main altar from the church of Liptószentandrás (today Liptovský Ondrej, Slovakia). The altarpiece, made in 1512 and illustrated below, survived fairly intact along with its intricate carved canopy. 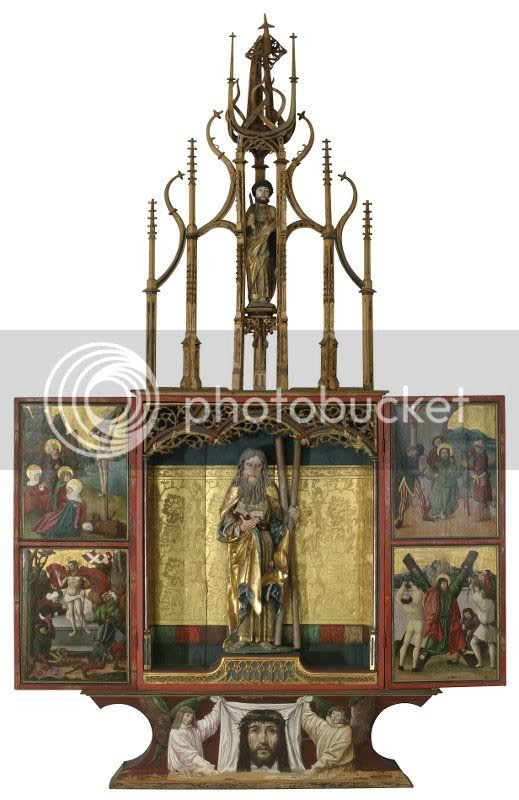