It is with sadness that I report on the passing of art historian Tünde Wehli, on November 18, 2019, in the 76th year of her life. Tünde Wehli had been a long-time senior researcher at the Institute of Art History of the Hungarian Academy of Sciences, starting her career there in 1970. Dr. Wehli was a scholar of medieval art, primarily manuscript illumination, and had published groundbreaking studies ranging from the 12th century Admont Bible  (the subject of her dissertation) to the Bibliotheca Corviniana. She is particularly well-known for her research on medieval patronage of manuscripts, and she also participated in the work of the Fragmenta Codicum research group of the National Széchényi Library. She also published extensively on other subjects, including Romanesque art, iconography, Hungarian royal monuments abroad as well as on seals and armorial charters. Perhaps most widely accessible is her small book on medieval Spanish painting (Painting in Medieval Spain, 1980), which was published in at least five languages. She participated in the preparation of a number of exhibitions organized by the Institute of Art History - most notably the exhibitions on King Louis the Great (1982) and Emperor Sigismund (1987). You can have a look at the list of her publications in the Kubikat catalogue. Many of her publications can be found in the digital publication archive of the Institute of Art History.

Dr. Wehli was a very kind, helpful colleague. Although I only worked with her during my brief tenure at the Institute 25 years ago, she has followed my progress with great interest over the years and was always ready to help with advice or literature. As a teacher - participating in the art history program at Pázmány Péter Catholic University - she was also greatly admired. It is no wonder that she was celebrated with a hefty Festschrift - published as a special volume of the journal Ars Hungarica - on her 70th birthday in 2013 (you can read it online here). She will be remembered fondly by her students and colleagues and will be greatly missed. May she rest in peace.

First publications on the murals of the parish church of Pest 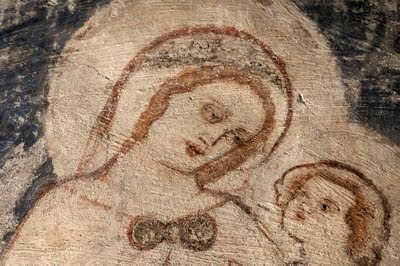 The 14th century fresco of the Virgin of Child, discovered last year in the sanctuary of the Inner City Parish Church of Pest (in downtown Budapest) created quite a stir. I suppose it always creates some stir when a a fresco appears older than the wall it is painted on. The sanctuary of the parish church of Pest has always been dated to around 1400, while the fresco clearly dates from  some time in the 14th century. This then of course calls for a re-evaluation of the construction history of the church, something which is quite hard to do without more extensive on-site research. Already, debate is raging on concerning the date of the newly discovered frescoes (also, some questions have been raised about the restoration as well). A detailed examination of the building and all its fresco decoration, however, is yet to be carried out.
The Hungarian journal Műemlékvédelem published several articles on the building, summarizing the results of previous art historical and architectural research, also publishing restorer Éva Derdák's overview of the uncovering and restoration of the mural (Műemlékvédelem, vol. LIV, 2010/6). The journal is not available online, but you can see the contents of the issue here. Tünde Wehli wrote an article for the journal on the newly discovered frescoes. After briefly describing the frescoes, she proceeds to bring analogies to the image of the Madonna. Most of these come from the north of the Alps, from France and Central Europe (esp. Bohemia), although Wehli acknowledges the Italian origins of several motifs of the fresco (such as the shape of the throne). In the conclusion of her article, Tünde Wehli dates the fresco to the last quarter of the 14th century - a date which requires a relatively modest modification in the building's chronology. 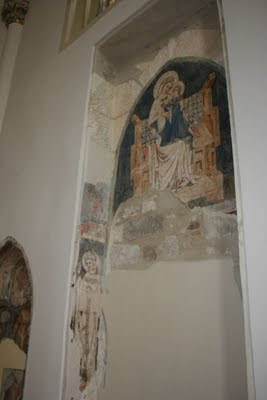 More recently, Mária Prokopp also wrote on the frescoes. She is a noted expert of the Italian connections of Hungarian medieval painting (I wrote on her theory of Botticelli in Esztergom). Her article was published in Múzeumcafé, which is a flashy magazine about museums, and is not really known for serious studies on medieval art. Prokopp's article can be read in the online version of Múzeumcafé vol. 5, 23 (2011 június/július), and also here. A somewhat more detailed version of Prokopp's article is available in the journal Magyar Sion (2010/2, full text available here). Prokopp's study also appeared in the journal of the Budapest History Museum (Tanulmányok Budapest Múltjából 36, 2010),  in what can be considered as its definitive version to this date. A pdf-version of the Hungarian-language article is available here; there is a brief German summary at the end. Prokopp cites mainly Italian analogies from the beginning of the Trecento, and thus dates the fresco of the Virgin and child to around 1320-1340 (the fresco of the bishop she considers even earlier, from the end of the 13th century). In explaining the significance of the frescoes, she analyses the historical importance of the church as well.
I've had no time to write anything more than some blog-length pieces on the fresco so far. My brief report on the find (essentially the same as my first two blog entries - see part I and part II) was summarized for the newsletter of the International Center of Medieval Art (April 2011 issue), while my report on Hungarian azurite was picked up by National Geographic Hungary (May 2011). Hopefully I'll get to write more about it soon!
Posted by Zsombor Jékely on 6/23/2011 No comments: