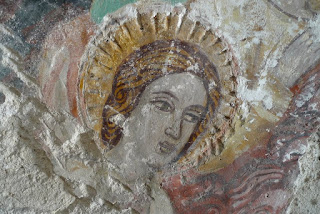 The cathedral of Nyitra (Nitra, Slovakia) is one of the oldest, most complex, and - until quite recently - least known cathedral building of medieval Hungary. Located north-east of Pozsony/Pressburg/Bratislava, the bishopric of Nyitra was founded before the Magyar Conquest, at 880. The bishopric was established at the seat of the Principality of Nyitra, on the eastern fringes of the Carolingian Empire. After the Conquest, the settlement became a ducal residence, and king Koloman I reestablished the bishopric some time before 1113. The cathedral was dedicated to St. Emmeram, as well as to the canonized local hermits, St. Zoerard and Benedict. The cathedral has a dual church: one dating from the Romanesque period, while the other Gothic, from the middle of the 14th century. However, the entire ensemble was rebuilt in Baroque style. The restoration and research of the buildings have been going on since 2007. Already, this research has yielded spectacular results: especially with the uncovering of a large Renaissance red marble tabernacle (with a frame of white marl from Buda), similar to the ones known from the parish church of Pest and from the cathedral of Pécs. Dated 1497, the Renaissance tabernacle at Nyitra is earlier than these, being a very significant example of Florentine-style early Renaissance carving in Hungary.

As restoration of the church continued this summer, work progressed in the southern church building of the cathedral. This is the building with a Romanesque apse, which has been extended/rebuilt towards the west in the 14th century. This construction likely dates to 1378, when such work carried out by bishop  Dominic was recorded. Already at the beginninf of the year, parts of a Late Gothic fresco have been spotted behind a Baroque stone altar dating from 1662. Now, however, the entire altarpiece has been temporarily dismantled, and the entire fresco can be seen and studied. The find is of major importance: it comes from a cathedral church, and the centuries behind the altarpiece saved the fresco from any repainting or earlier restorations. The condition of the painted surface is thus fully intact - and this surface is of a considerable size. The quality of the paintings is also very high - along with the recently uncovered frescoes of Torna (Turňa nad Bodvou, near Košice) they are defitinely among the finest wall paintings from the decades around 1400 from Upper Hungary. The theme of the frescoes is a Marian cycle, with the Last Prayer and the Coronation of the Virgin.