Exhibition on Medieval Towns in Magdeburg 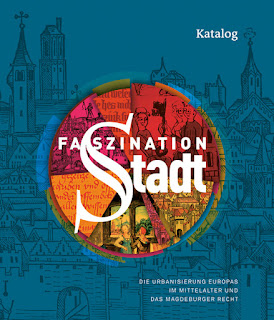 The new exhibition of the Cultural History Museum is titled 'Faszination Stadt  - The Allure of Cities,' and is dedicated to the network of medieval towns following Magdeburg law. The topic is broadly framed, starting with city development in antiquity - but then it focuses on the development and spread of Magdeburg town law in the Middle Ages. The Magdeburg law originated in the twelfth century and spread in the course of the German east settlement across Central Europe, particularly to the areas of Poland, Bohemia and the Kingdom of Hungary. It is a characteristic feature of urbanization in this regiou and its peculiarity is that it divided the local power between the council and a jury appointed by the ruler. This made it easier for territorial rulers such as the Teutonic Order in the Baltic States and the kings of Poland and Hungary to control the cities they established and granted freedoms to. The legal framework was provided by the Sachsenspiegel, codified in 1230, which was a summary of existing legal knowledge. Starting from the story of Magdeburg law, the exhibition presents the legal framework, the day to day operations and daily life in medieval towns of Central Europe.

The 250 objects on view are varied, ranging from luxurious gift items to objects of daily life. Given the subject, it is not surprising that a large number of loans from Hungary and the neighboring countries are featured in the exhibition.  The exhibition is accompanied by an 800-page catalog and by a volume of studies dedicated to the topic. It remains on view until February 2, 2020. You can find more information on the special website set up for the exhibition or in the flyer provided by the museum.

The results presented in the exhibition rely on a research project coordinated by the Museum. A website was also set up to provide information about Magdeburg law - it is a very useful resource, providing, among others, a map of European towns using Magdeburg law.

Visegrád was one of the most important towns of medieval Hungary, serving as a royal residence for much of the 14th century. The town is ruled by a majestic castle on top of a hill overlooking the Danube, while a monumental 13th century keep guards the road under the hill, by the river. Even more famous is the large royal palace, expanded and embellished by King Matthias Corvinus. However, until recent times, relatively little information has been available on Visegrád in English. One should mention the volume edited by László Gerevich, titled Towns in Medieval Hungary (1990), where Gerevich himself briefly considered Visegrád in the framework of a general study. The other book to be mentioned – titled Medium Regni – dealt with Hungarian royal centres in the middle of the Kingdom, and here Gergely Buzás provided an overview of Visegrád, focusing on the royal residences. the history and topography of the settlement itself. In 1995, an English-language volume - titled Medieval Visegrád - was published about the royal palace and the Franciscan monastery standing next to it, and the royal palace was also featured in a number of exhibition catalogues and study collections. In addition, a book is available on the Hercules fountain attributed to Giovanni Dalmata.

Archaeolingua publishers in Budapest started a new series about medieval Visegrád, of which so far two volumes have been published. The books provide up to date information about this important royal centre. The first volume in the series was dedicated to the most important monument in town, the medieval royal palace and the neighbouring Franciscan monastery. While a lot has been published on the royal palace in Hungarian, this volume is the first extensive treatment of the subject in English. You can read a review of the book by Pál Lővei in Hungarian Archaeology (2014 Spring). The second volume is dedicated to the town itself, which has always been overshadowed by the royal residences located there. Yet, for extended periods during the 14th century, Visegrád served as the capital city of the Kingdom of Hungary, and thus is worthy of our attention. The neglect of previous decades has been redressed by extensive archaeological research during recent years and now by this very important publication. The book relies on the results of new excavations and the research of one of the authors, Orsolya Mészáros. She is joined by a number of well-known experts of medieval archaeology and history: including the two other editors of the volume, Gergely Buzás and József Laszlovszky. Both have dedicated a considerable number of publications to Visegrád before, and Buzás has worked at the King Matthias Museum of Visegrád for a long time, serving as its director since 2011. The fourth author is Katalin Szende, a noted historian working on late medieval Hungarian towns.

From their analysis presented in this volume, the special character of Visegrád emerges. Although regarded in the Late Middle Ages as one of the most important towns of the kingdom, the settlement in fact was not significant when the court was away. It had no (or only regional) economic significance, no ecclesiastical institutions of national significance, no serious fortifications (apart from the fortifications of the royal residences). The presence of artisanal guilds cannot be demonstrated and only a very small number of the town’s citizens are known to have studied at foreign universities. Even when the court was at Visegrád during several decades in the 14th century, Visegrád was not regarded as the capital of Hungary – that role was reserved for Buda. The main reason of its emergence during the 14th century was that high-ranking nobles and court officials owned houses there, which also served as their offices. No wonder then, that when the court left in the early 15th century, Buda (and Pest on the opposite side of the Danube) far surpassed Visegrád in importance. Although Visegrád retained its privileges until the end of the Middle Ages, during the 15th century it was only a small settlement next to an important royal residence, the royal palace.

These books provide a welcome addition to the growing library of books on medieval Hungary available in English. It is to be hoped that the series will continue: the Árpád Period settlement of Visegrád – with the bailiff’s castle, the archdeaconal church as well as the 11th century monastery of St. Andrew – and the Upper and Lower Castle certainly provide ample material for future volumes in the series, and I hope we can see these soon.

I wrote a more extensive review of the second volume, dedicated to the town, which can be read in English or in Hungarian in the Spring 2015 issue of Hungarian Archaeology.