New book on Royal Seals of the Árpád Dynasty 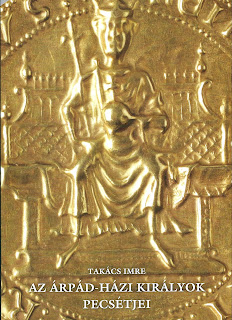 A new book, written by Imre Takács on Royal Seals of the Árpád Dynasty was presented today at the Hungarian National Archives. The book is the first part of a new series, titled Corpus Sigillorum Hungariae Mediaevalis. The series aims to provide catalogue of Hungarian medieval seals - including royal seals, aristocratic seals as well as seals of towns, religious institutions and other organizations. The first volume is dedicated to seals issued by Hungarian kings of the Árpád Dynasty (1000-1301), and includes a total of 48 entries. The use of royal seals was first referred to in the foundation charter of the Abbey of Pannonhalma, issued in 1001. However, no surviving examples of the earliest royal seals - including seals of King Stephen I - are known, thus the series of examples starts with a humble lead bulla of King Peter (1039-1042, 1044-1046), followed by the seal of summons of Andrew I (1046-1060). Most spectacular are the great gold seals of 12th and 13th century kings - such as the gold bulla of King Emeric (1196-1204), seen on the cover of the book (and here to the left). The book also includes four seals of queens from the period, as well as a few seals issued by princes of the Árpád Dynasty.

In addition of a full catalogue of these seals (48 entries total), the book also contains an extensive introductory study by Imre Takács, dedicated to art historical questions. Subjects include 'type history and iconography', as well as questions of 'image and style'. The rich material in the comparative illustrations make clear that these miniature masterworks of goldsmith work are related not only to western European royal seals, but also to contemporary monumental sculpture.

The full text of the book is included in an English translation as well, making the material accessible for the wider public.

The Danube Bend in the Middle Ages - Exhibition

A new temporary exhibition opened last Saturday at Vác, dedicated to the medieval history of the region known as the Danube Bend. Stretching from Esztergom through Visegrád down to Szentendre, the area includes some of the most important medieval settlements of Hungary (towns located in the Medium regni, as the central part of the kingdom was known). The exhibition was organized by the Pest County Museum, centred in Szentendre, with the cooperation of other major museums of the region: the Balassa Bálint Museum of Esztergom and the King Matthias Museum of Visegrád. The exhibition is on view at Ignác Tragor Museum of Vác (in the former Greek Orthodox church), the museum of another major city in the region, located on the other side of the Danube. As the well-established system of Hungarian county museums is currently being completely shaken up and reorganized, the exhibition can be seen as an attempt to demonstrate the power of the old system - capable of cooperation, joint organization and the like. (Hungarian-speaking readers can read about the changes for example here - I could not find any English-language reports on this major reorganization).

Of the towns mentioned above, Esztergom was and is the seat of Hungary's primate archbishop and a former royal seat, Visegrád boasts a royal castle and a royal palace at the bottom of the hill, and Vác was (is) an important bishopric, while Szentendre was a small market-town along the Danube. Thus there is plenty of material to show in an exhibition dedicated to the region - the exhbition instead is adapted to the small exhibition space, and focuses mainly of recent archaeological finds. This include - among others - a Romanesque baptismal font recovered at Vác, as well as a fragment of the 15th century terracotta relief showing the Battle of Amazons, and attributed to Gregorio di Lorenzo (formerly known as the Master of the Marble Madonnas).

The exhibition will later also be shown at Szentendre, Visegrád and Esztergom. As the Esztergom Museum and of course the royal palace at Visegrád both have their significant medieval exhibitions, the present exhibition will clearly appear in a different light at future venues. I have not yet seen the exhibition, and I could find no information on the websites of any of the museums involved. (The invitation to the opening ceremony can be seen here).

The curator of the exhibition was Tibor Ákos Rácz, and was opened by Imre Takács, director of the Museum of Applied Arts, and a noted medieval art historian himself.

While we are on the subject of the Danube bend, I would like to mention related news as well. At the King Matthias Museum in Visegrád, visitors can see a temporary museum in addition to the permanent displays. Titled "Not without a trace...," the exhibition displays finds from the period of the Magyar Conquest, from the collection of the Pest County Museum. Star attractions of the show are recent finds from the vicinity of Bugyi - about which I reported earlier. The traveling exhibition is on view at Visegrád until October 28th.

Archaeologists of the Pest County Museum also had luck late this summer - the very low water level of the Danube enabled them to recover a medieval shipwreck in the Danube Bend. Discovery News reports on the find. Maybe objects from this boat can be incorporated in the next incarnation of the "Danube Bend in the Middle Ages" exhibition.

The Academic doctoral defense of Imre Takács (see my previous post) made me think about Villard de Honnecourt's trip to Hungary. Takács's dissertation is about the early decades of the 13th century, when Hungary was one of the first areas outside Ile de France where French Gothic architectural and sculptural features appeared. The royal palace of Esztergom - especially the palace chapel - is a significant early Gothic building, built during the rule of King Béla III (1172-1196) next to the cathedral. The palace was not quite finished when in 1198 Béla's son, King Emeric handed it over to the archbishop of Esztergom - thus maybe the chapel was only finished after this date. Not Esztergom, but the royal abbey of Pilis is at the center of Imre Takács's dissertation. This Cistercian Abbey - located roughly between Esztergom and Buda in the Pilis hills - was founded by the king in 1184. In 1213, Queen Gertrude, the wife of Andrew II was murdered, and the queen was buried at Pilis Abbey, which - at least the eastern part - was surely completed by that time.

At this period, a renewed impact of French Gothic (High Gothic, to be precise) can be detected in Hungary - especially at Pilis and at the Benedictine Abbey of Pannonhalma. Crucial monuments include the tomb of Queen Gertrude and the famous Porta Speciosa at Pannonhalma, both dating from the 1220s. It is perhaps not coincidental that roughly at the same time, the famous Villard de Honnecourt visited Hungary. Just as we are not quite sure of his profession, it is similarly unclear what he did in Hungary or when exactly he visited. Evidence for his visit is included in his sketchbook: on fol. 10v, next to the drawing of an aisle window at Reims, Villard writes: "I had been sent into the land of Hungary when I drew it because I like it best." He also mentions on another folio the he "was once in Hungary, where [he] remained many days". Of all the things he saw there, he chose to draw a pavement, which he saw in a church - at a place he did not name.
Theories abound concerning the date and purpose of Villard's Hungarian visit. Pilis abbey emerges as a place he may have visited for several reasons:
One of the pavement motifs drawn by Villard in Hungary is known from Pilis Abbey.
The tomb of Gertrude, as well as the fragmentary tomb slab of a knight is in the same style (the characteristic Muldenfaltenstil) as Villard's drawings - leading Gerevich to believe that these were designed by Villard.
Mentioning these and similar comparisons, Imre Takács also proposes a hypothesis for the historical context of Villard's Hungarian trip (published first in a study: “The French Connection: On the Courtenay Family and Villard de Honnecourt Apropos of a 13th-Century Incised Slab from Pilis Abbey,” Künstlerische Wechselwirkungen in Mitteleuropa, ed. Jirí Fast and Markus Hörsch, Ostfildern, 2006, pp. 11-21.). After the murder of Queen Gertrude (of Andechs-Meran), King Andrew II married Yolande de Courtenay, and Imre Takács emphasizes the role of the Courtenay family in Hungary. They were also the lords of the area where Villard was from. Takács proposed that the red marble tomb slab from Pilis was that of Robert de Courtenay, Latin emperor of Constantinople (1221-1228).
Takács also poses the following questions: “Is it possible that Villard … may have been traveling in the entourage of Emperor Robert on his way east in the winter of 1220? Could we not suppose in fact that Villard was a multi-talented individual in the Courtenay court and capable of carrying out “engineering” tasks, giving theoretical advice and making practical decisions? And finally, is it not possible that the quality of the drawing on the Pilis inscribed slab is so similar to Villard’s personal style, because he may actually have taken part in the work’s creation, if only in so much as making the sketches?”
Read more »
Posted by Zsombor Jékely on 11/19/2010 No comments:

The following events will no doubt be of interest to medieval art historians in Budapest.

November 18 (Thursday): Open debate and defense of the doctoral dissertation of Imre Takács at the Hungarian Academy of Sciences. He is to become a Doctor of the Hungarian Academy (a much higher level than a PhD, see here). His dissertation is titled: Reception of Gothic in the Kingdom of Hungary at the time of King Andrew II (1205-1235). Imre Takács is the director of the Museum of Applied Arts. More info on the website of the Academy.

November 24 (Wednesday): Dedication of a room at the Art History Department at ELTE named after Lajos Fülep, Hungary's great art historian. Also, the presentation of the annual prizes awarded by the Department. For more info, see here.

November 25 (Thursday): Presentation of two books published by the László Teleki Foundation. I wrote on both books here before: one is by Márton Sarkadi about Gyulafehérvár cathedral, the other was edited by Tibor Kollár on medieval architecture in southern Hungary. The books will be presented by Ernő Marosi, Szilárd Papp, and Judit Tamási, see here.

Menawhile, the Natalie Zimon Davies Annual lectures are still going on at the Medieval Studies Department of CEU.