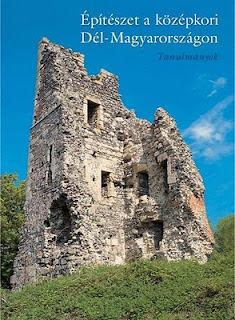 A long-awaited book has finally appeared last week. Dedicated to medieval architecture in the southern part of the Kingdom of Hungary, the book has been in the making for about 10 years. In a sense it is a continuation of a volume focusing on the southern area of the Great Plains, published in 2000.* Both books were edited by Tibor Kollár. This new publication is quite wide in focus: geographically it encompasses territories ranging from the north-eastern corner of present-day Slovenia all the way to southern Transylvania in Romania. Most of the monuments discussed are located today in Croatia and Serbia. These southern counties of the Hungarian Kingdom flourished during the Middle Ages, but got largely devastated during the 150 years of Ottoman rule and the wars of the period. Nevertheless, as this book proves, there is still an enormous amount of surviving material, much of it quite unknown for modern research - either in Hungary or elsewhere.
Some of the monuments discussed in detail (and in several studies) include the Benedictine abbey of Dombó (located near Rakovac in Serbia), the prior of Arad (Arad, Romania) and the cathedral of Zágráb (Zagreb, Croatia). In addition to architectural monuments - mainly churches and castles - and their stone carvings, a number of important wall-paintings are also published in the volume, such as the frescoes of the former Pauline monastery near Csáktornya (at Šenkovec in Croatia) and of the former parish church of Pozsega (Požega, Croatia). There are overviews of medieval churches in the Prekmurje region of Slovenia (parts of the medieval Hungarian counties of Vas and Zala), of castles in the area between the rivers Drava and Sava, and of Pauline churches. Most studies, however, are monographic articles dedicated to single monuments. Overall, the book contains 26 long studies.

While the majority of the authors are based in Hungary, there are also important studies by Slovene, Croatian, Serbian and Romanian authors. Hungarian authors include such noted scholars as Ernő Marosi, Imre Takács, Béla Zsolt Szakács. Sándor Tóth, who sadly passed away while the book was in preparation, also contributed an important study on the Gothic rebuilding of Dombó monastery. All the studies are published in Hungarian, but there is a section containing English summaries of them. It also has to be mentioned that the book is 1080 pages long, and contains over 600 illustrations, most of them new photographs taken especially for this volume by Attila Mudrák.