József Lángi - Zsombor Jékely: Falfestészeti emlékek a középkori Magyarország északkeleti megyéiből. Budapest: Teleki László Foundation, 2009. 459 pp. ISBN 978-963-7081-170
As new discoveries are still being made (these days especially in the former Saxon towns of Transylvania), we hope to continue the series in the near future. 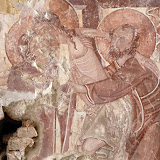 Clicking on this picture will take you to a Picasa album with a few photos of medieval wall paintings in Transylvania (most of which are included in the first book).
Posted by Zsombor Jékely on 8/09/2010