Destruction of the centers of medieval Hungary

On August 29 1526, the army of Suleiman the Magnificent defeated the Hungarian army at Mohács. King Louis II died on the battlefield, and the sultan's army marched on to take the capital, Buda. At that time, the Turkish army withdrew - but in 1541, Suleiman took the capital of the divided kingdom without having to lay siege to it. Two years later, he occupied the towns of Pécs, Székesfehérvár and Esztergom, and Visegrád fell soon after that. Thus all the centrally located towns - the Medium Regni - became part of the Ottoman Empire for 150 years. Because of the prohibition of figural religious imagery, this period led to the destruction of altarpieces, paintings, statues and to the covering up of frescoes. Damage to buildings was caused by neglect, but even more during the wars waged in order to reconquer these towns, especially during the Long War ('15 years' war,' 1591-1606) and the final campaign of 1683-1687. When the towns were retaken by the Christians, it was largely ruins what they found. Remains of important medieval buildings were generally taken down as new structures were erected during the 18th century.

As a result, the most important medieval sites of Hungary only survived as ruins, their remains recovered during various archaeological campaigns. The sites include Buda, the capital of the Kingdom; Esztergom, the seat of Hungary's Primate Archbishop; Székesfehérvár, the coronation and burial place of Hungarian kings; and Visegrád, perhaps the most important royal castle complex of the land.
The photos below illustrate what little is left of these sites. Rather than illustrating the destruction (about which many contemporary prints were made), I chose mainly photos showing moments of discovery - although the first example will be of destruction. 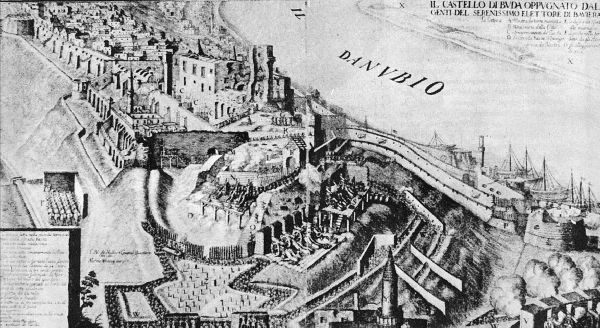 This is an image of Buda castle from 1686, at the time when the center of the Kingdom was retaken by the joint Christian armies. The print shows the castle hill, with the ruins of the medieval royal palace on top of the hill. Very little of this survived when the new, Baroque royal palace was built in the 18th century. 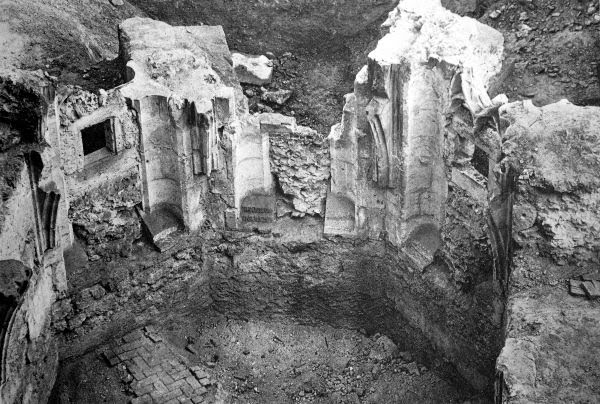 The Baroque and 19th century palace complex of Buda was severely damaged during WW II. This, however, gave a chance for archaeologists to uncover remains of the medieval royal palace. The image above shows what was left from the lower level of the two-storey royal chapel (needless to say, nothing remains of the more prestigious upper chapel). These parts of the castle are now incorporated into the Castle Museum of Budapest History Museum. 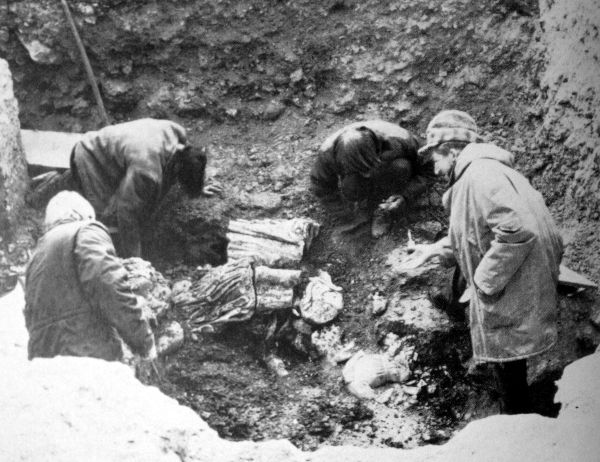 Excavations on Buda castle hill continue to this day. The greatest discovery was made in 1974, when a large group of Gothic statues was excavated in one of the courtyards of the palace. These statues, dating from the period of King Sigismund, are today the most clear indication of the former glory of medieval Buda. You can learn more about them here and here (look at the statues from Budapesti Történeti Múzeum). 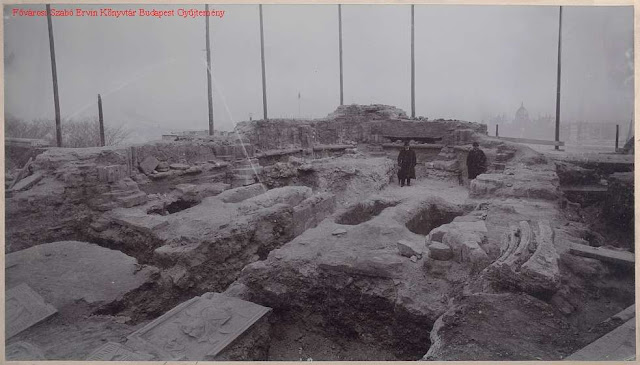 Other sites of medieval Buda did not fare much better. The image above shows the excavations of the ruins of the Dominican church of Buda in 1902. The ruins are today incorporated into Hilton Hotel, you can see photos of them here. 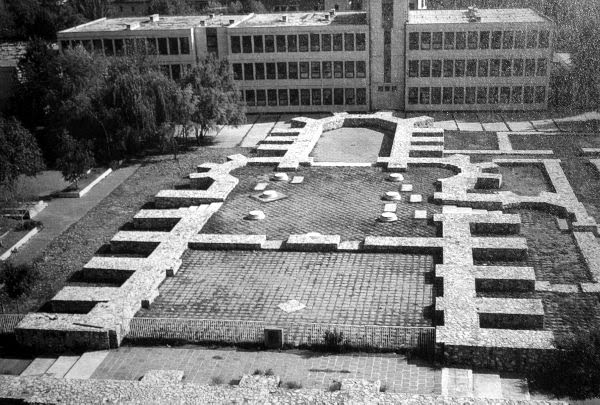 Particularly little remained of the medieval buildings of Óbuda (Buda Vetus), the first royal seat and later an important estate of the Queens of Hungary. The photo above shows the ruins of the Óbuda church of the Poor Clares, founded by Queen Elizabeth in 1334 next to the royal castle of Óbuda. To illustrate the former richness of this church, I would like to call attention to the small reliquary shrine from this church, preserved today at the Cloisters of the Metropolitan Museum. Fancy computer-generated reconstructions of these building do not really compensate for their loss. 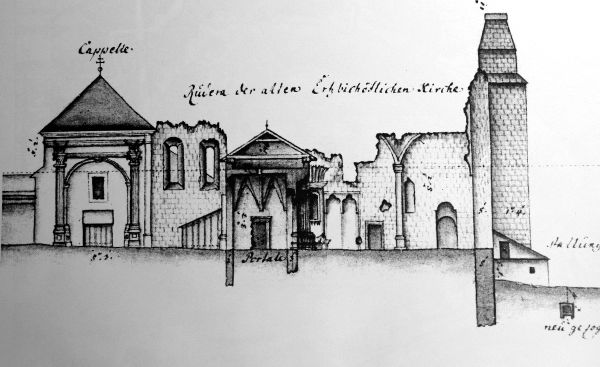 Esztergom was the earliest center of Hungary, even before it became a kingdom. Saint Stephen, the first king of Hungary, was born here around 970. The first cathedral of Hungary, the seat of the Primate-Archbishop, was built here. The building, dedicated to St. Adalbert, was built and rebuilt in many campaigns during the Middle Ages, and a series of chapels were also added to it. The last of these was the beautiful Renaissance chapel of archbishop Tamás Bakócz, built in 1506, and the only part of the cathedral complex surviving to this day. The rest of the cathedral survived the Turkish wars in the condition shown on the 18th century drawing above - and all of this was demolished in 1822-23, to make way for the new cathedral. 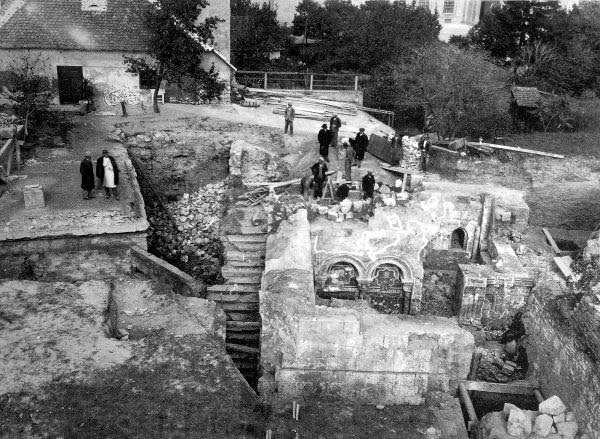 Next to the cathedral stood the royal palace of Esztergom, largely built on the site of an earlier building at the end of the 12th century, and given over to the archbishops soon after that. Remains of this 12th-century palace, and its fresco decoration from various periods, were excavated between 1934-38 (shown above). Even in a ruined state, the palace and cathedral complex is today one of the most important medieval sites of Hungary.
Visegrád 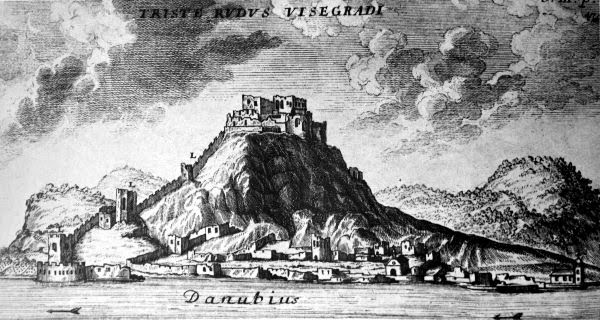 Triste rudus Visegradi - says the label of the illustration of Visegrád in Matthias Bél's Description of Hungary from the middle of the 18th century. By that time, only the royal castle on top of the hill, and the adjoining keep at the foot of the hill stood - both erected in the 13th century. The famed royal palace of 14-15th century kings was completely destroyed and largely covered over. 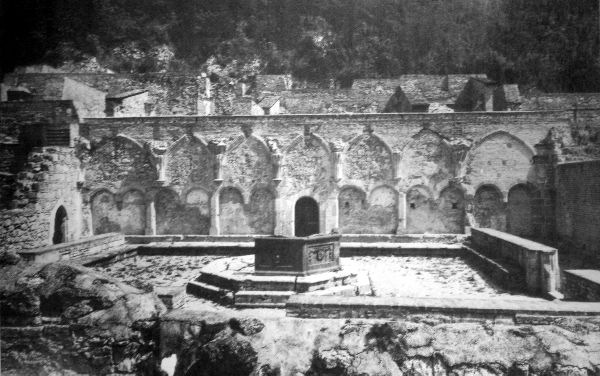 The ruins of this royal palace were excavated by János Schulek, starting from 1934. Excavations and reconstruction continue to this day. The photo shows the central courtyard of the palace, as seen after the first excavation campaign. Remains of the red marble Renaissance font, erected by King Matthias and carved by Giovanni Dalmata, can be seen in the center. To see what this looks like today (after a much-debated, almost full-scale reconstruction), visit the website of Visegrád Castle Museum (King Matthias Museum).
Székesfehérvár Székesfehérvár (Alba Regia) was another early royal center of Hungary. The archdeaconry and church of the Virgin Mary was one of the most important spiritual centers of the Kingdom. Coronations were only accepted as valid if performed at Székesfehérvár (by the archbishop of Esztergom, and with the Holy Crown of Hungary). King Saint Stephen and his son, Saint Emeric were buried in the church, which became the center of their cult. A total of 15 kings were buried here, including Louis the Great and King Matthias. The sad chronicle of the destruction of the church and the royal tombs is all-to-well known. The last chapels were torn down during the 18th century, when material was needed for the buildings of the newly-founded cathedral and the bishop's palace. The paltry remains of this once greatest church of medieval Hungary have been recovered through several excavation campaigns, started in 1862 by Imre Henszlmann (seen above). You can read more about the church and the excavations on the website of the King St. Stephen Museum.
As a result of all this (and much more) destruction in the center of the Kingdom, the history of medieval art in Hungary has to be written relying heavily on monuments from more peripheral regions - such as Upper Hungary and Transylvania, areas located in present-day Slovakia and Romania. This situation requires strong cooperation among medieval art historians from the region.
Posted by Zsombor Jékely on 9/27/2010