The Fejérváry collection of ivories 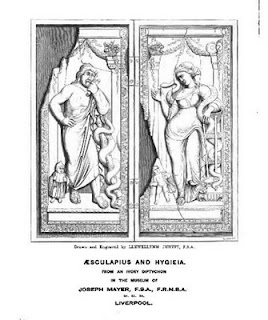 Gábor Fejérváry (1780-1851) amassed a large collection of ancient and medieval objects in his house at Eperjes in northern Hungary (today Presov, Slovakia). After his death, his nephew Ferenc Pulszky inherited the collection. Pulszky at that time was living in England - he had to leave Hungary for his role in the 1848 revolution and war for independence. Pulszky managed to deliver parts of this collection to England, as he decided to sell much of it. In 1855 Liverpool goldsmith, jeweler and Fellow of the Society of Antiquaries Joseph Mayer (1803—86) purchased the Fejérváry ivory collection from Pulszky. The collection contained a large number of late antique, early medieval and later ivories, as you can see in the original catalogue published just after the sale, in 1856 (full text here). You can read more about the Fejérváry-Pulszky collection, and Fejérváry's Liber Antiquitatis, which contains images of objects in his collection, on the website of the Museum of Fine Arts, Budapest.

Joseph Mayer gave his collection to the Liverpool Museum in 1867. Ancient ivories are in the World Museum today, while Gothic ivories from the Fejérváry-Mayer collection are in the Walker Art Gallery. The catalogue of the Liverpool ivories by Margaret Gibson was published in 1994 (see this link). The National Museums Liverpool Blog provides a bit more information on these ivories. When it comes to Gothic pieces, you can learn a lot more via the Gothic Ivories Project of the Courtauld Institute of Art. Search for the name of Fejérváry to get a list of the ivories from his collection (this link should work). One of the finest pieces, a 14th-century French mirror case, is illustrated below.

The Fejérváry collection held many other treasures, including such rare pieces as the Armento Rider (British Museum) or Codex Fejérváry-Mayer (also in Liverpool), one of the finest surviving Aztec manuscripts. You can read about that manuscript on the BibliOdyssey blog.

Upon returning to Hungary after his exile, Ferenc Pulszky became the director of the Hungarian National Museum. Items he could not sell from the Fejérváry collection, as well as a large number of other objects he collected later in his life, are in various museums of Hungary today. János György Szilágyi writes more on him in The Hungarian Quarterly.