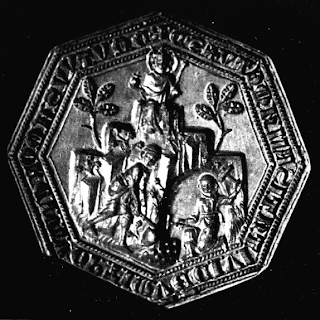 After some good news reported yesterday, today I have something sad to write on. As reported by Hungarian and Romanian press alike, the seal matrix of the town of Nagybánya has gone missing some time in late July. (Nagybánya was known as Asszonypataka or  Neustadt in the Middle Ages, and was one of the most important mining towns in Szatmár county. The town is today called Baia Mare, and is the seat of Maramures county of Romania). The seal matrix was stolen from a glass showcase in the County Historical and Archaeological Museum of Maramures County. The theft was announced on August 2nd.

The octagonal silver seal matrix of Nagybánya is one of the celebrated miniature masterpieces of 14th century Hungarian goldsmith work. It can be dated to the 1360s, and was probably made in a royal workshop. King Louis the Great (1342-1382) has given several privileges to the emerging mining town, and supported construction of its great parish church, dedicated to St. Stephen. The seal shows a seated king atop a hill - likely St. Stephen, with two miners working below. The inscription on the perimeter reads: S[igilium] d[e] R[ivulo] D[ominarum], Mutuus amor civiu[m] optimu[m] e[st] civitatis firmamentu[m] (roughly: 'The mutual love of citizens is the best foundation of the city').

After missing for centuries, the seal matrix was found in a vineyard in 1904. It was put on display in the history museum in 2004. Hopefully it will be recovered soon.

Read more: news report in Romanian and in Hungarian.

Most recent overview of the medieval architecture and sculpture of Nagybánya - in particular an overview of the church of St. Stephen - is available in a new volume about medieval Szatmár county, available in full text in Hungarian and Romanian. Look for the studies of Szilárd Papp and Veronika Csikós.
Posted by Zsombor Jékely on 8/04/2011 No comments:

As it was revealead on Tuesday, two highly important Romanesque stone carvings had been stolen from the Hungarian National Gallery some time in early February. Both carvings were on view in the medieval lapidary of the Gallery, located on the ground floor of the building. There is no explanation as to how or when the theft took place.

The missing stones are the following: 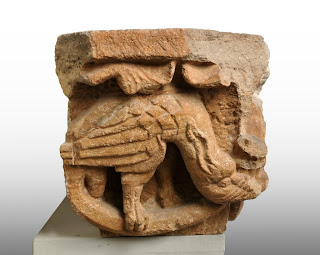 A cornice fragment stemming from the church of Ják, dating from around 1230. The carving, decorated with the figure of a dragon (which originally joined another dragon), comes from the west portal of the abbey church of Ják, and was most recently published in the catalogue of the collection, written by Sándor Tóth (see my earlier post on this). 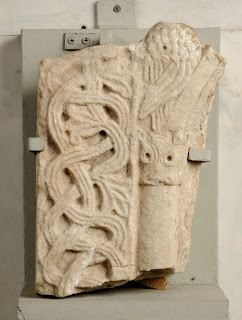 Left side fragment of a relief slab from the abbey church of Somogyvár, dating from around 1150. The stone carving belongs to the Rippl Rónai Museum of Kaposvár, it was on long-term loan in the National Gallery. The carving was published in the Pannonia Regia exhibition catalogue of the National Gallery in 1994.


It seems clear that objects such as these cannot be sold on the open market. It is hoped that the carvings will be recovered soon. The images here are from the official Hungarian database of stolen artwork, maintaned by the National Office of Cultural Heritage.
Posted by Zsombor Jékely on 2/18/2011 1 comment: