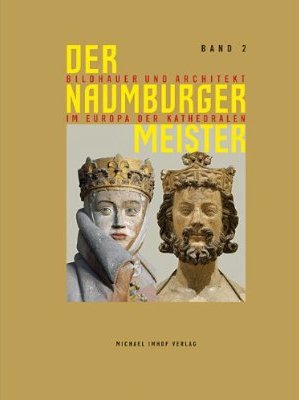 This week an international art history conference is commencing in Naumburg, in conjunction with a major exhibition dedicated to the Naumburg Master. The exhibition - which is still on view until the beginning of November - is accompanied by a monumental catalogue, published in two volumes, and in over 1500 pages. Titled “The Naumburg Master - Sculptor and Architect in the Europe of Cathedrals“, the Saxony-Anhalt State Exhibition focuses on "the sculptors and stonemasons associated with the name “Naumburg Master“ [who] had an outstanding reputation throughout medieval Europe." The main topic of the catalogue is the French origin of the so-called Naumburg Master, with special emphasis on the impact of the Reims cathedral workshop on Central Europe (there is an entire chapter dedicated to the effects of Reims, with 9 studies - see the contents here). This is not a review, and the following is only based on a cursory study of the book.

I think that a broader examination of direct connections of Central European artistic centers with the main sites of High Gothic art in France would have been necessary. In this context I definitely would have liked to see at least a few passages about medieval Hungary. Due to dynastic, personal and other, as yet untraced connections, a number of Hungarian monuments from the 1220s and 1230s are directly connected to the most fashionable monuments of French High Gothic. A few examples: in the early Gothic Cistercian Abbey church of Pilis, the tomb of Queen Gertrude (killed in 1213) was erected in the 1220s by a master hailing from Chartres or Reims. The tomb is one of the earliest examples anywhere of the combination of the Roman type sarcophagus and the medieval gisant. Another tombstone from Pilis, this time of a knight, gives the impression of being a two-dimensional, drawn version of the most fashionable High Gothic statues at Chartres. At about the same time, Villard de Honnecourt was also in Hungary (and likely at Pilis), coming directly from Reims - but it is not known what exactly he did here.


Furthermore, the final section of the Benedictine Abbey church of Pannonhalma, consecrated in 1224, would have been unimaginable without the cooperation of builders and stone carvers trained in Champagne (Reims). The Porta Speciosa there (also completed by 1224) was also carved by this group of masters coming from Reims. The masters who worked on the vaulting of the nave as well as the building of the southern wall and portal must have been in residence in Hungary at the same time as their compatriots were working on the Capella Speciosa in Klosterneuburg.

Other churches of that exact period, such as the Church of St Stephen protomartyr in Esztergom or the Cathedral of Kalocsa also followed French Gothic prototypes. Now, much of this is largely destroyed (except for Pannonhalma) - but stone carvings, statue fragments survive in large number. Much of this material has been published extensively in German, English and French, in international catalogues and journals, as well as in many Hungarian publications. Authors such as Ernő Marosi, Imre Takács and Tibor Rostás wrote extensively on the “French connection”.

When one looks at the "Naumburger Meister" catalogue, it seems that none of the above monuments or art historical connections are mentioned at all in those 1566 pages. No mention of Pilis, Esztergom or Pannonhalma. No Marosi, Takács or Rostás in the bibliography (there is no index in the book). No comparison of masked consoles or the Laubwerk of Reims with Pannonhalma (only with Naumburg). No mention of the relevance of the date of 1224 (consecration date of Pannonhalma) to the chronology of Reims. No mention of the connections of Reims, Pannonhalma and Bamberg (Fürstenportal), much discussed in the literature. Only a brief mention of Villard’s Hungarian trip, without any discussion of the context of this visit.

I think at least a brief overview of some of these Hungarian monuments - as well as some of the Bohemian or Polish monuments, which are similarly lacking from the catalogue - would have made for a much better understanding of the wider Central European context of the Naumburg Master. I also think this task still has to be done.

I don't want to get into further details here - but to help start discussion, I am providing some bibliographic references - books and studies which could have been consulted in the making of the catalogue. To be fair, I am not citing obscure studies in Hungarian, only publications in world languages, available at the Zentralinstitut für Kunstgeschichte in Munich.