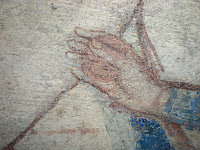 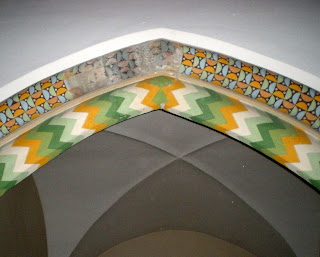 These are all just very small fragments in a building the size of the Inner City parish church. Although some areas of the large wall surfaces of the ambulatory have been checked, the walls have never been systematically examined for frescoes. As a great new discovery demonstrates, there are still surprises to be found in the church.

Earlier this year, restorer Éva Derdák was called to examine the walls, as they were to be repainted. Most attention was given to the eastern wall of the ambulatory, where a walled-in wall niche was discovered. In the back wall of this niche, a beautifully preserved, almost intact fresco of the Virgin and Child was found. In front of an azurite blue background, the Virgin is shown enthroned on an elaborate throne. The Christ child is standing on her lap. The fresco has been conserved by Éva Derdák, and restored using minimal retouches.
The depiction of the Virgin and Child was on the back of the niche, in the upper part of the wall surfaces (there may have another image below it). On the narrow side walls of niche, additional figures were depicted, of which a bishop survives. The original architectural context of the fresco did not survive, but it could be established that the fresco formed the back wall of a ciborium (a canopy), and in all likelihood served as an altar picture. When the canopy had been dismantled at an unknown date, the fresco was whitewashed, and later the entire niche was walled up - preserving the image to this day.

It is clear that this fresco is earlier than the Passion-scenes in the wall niches. In fact, the fresco seems earlier than the current dating of the entire sanctuary would allow. Based on circumstantial historical evidence, construction of the large new hall-sanctuary and ambulatory had been associated with the parish priest Gergely Babócsai, royal chaplain, who has been documented in 1398. The fresco likely dates to the middle of the 14th century, forcing art historians to rethink the history of the entire building (current excavations on the outside of the church will help this process). The newly discovered fresco has been presented to the public today - now art historical work can start in earnest. The significance of the fresco, an intact image from the Angevin period, surviving right in the middle of the Kingdom of Hungary, is immense. 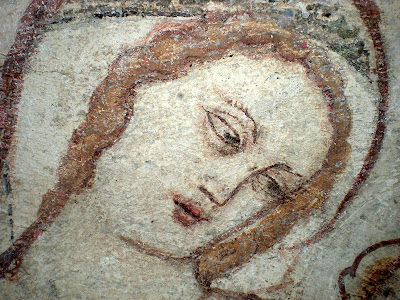 You can see more photos of the fresco in my Picasa album.
Posted by Zsombor Jékely on 9/23/2010