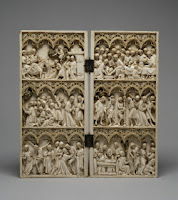 First I need to mention a new database, launched on December 15. The Gothic Ivories Project is an online database of ivory sculptures made in Western Europe ca. 1200-ca. 1530. The project is run by the Courtauld Institute of Art. In addition to the database - which currently gives access to about 700 ivories - the website also contains a news section, a bibliography and useful links. The goal of the project is very ambitious:  "a database which aims at including all readily available information on every surviving Gothic ivory, accompanied by at least one image." The website will gradually be added to through regular uploads.

Full digital editions of medieval illuminated manuscripts seem to multiply these days. One of these in particular caught my attention last week (via www.medievalists.net): The National Library of Wales made available a 15th century illuminated manuscript with the Battles of Alexander (Peniarth Ms 481D).
As the website tells us, this late 15th-century manuscript is in two parts, and both parts were likely bound together as one volume from the outset, probably in England. The first part of the manuscript was written by an English scribe and illustrated by a Flemish artist, while the second part of the manuscript was written and illuminated in Cologne. The Digital Mirror section of the library's website contains digital images of other medieval manuscripts, such as the Sherbrooke Missal.

The next resource is not exactly a website, but a subset of a larger resource. The Fototeca of the Biblioteca Berenson at Villa I Tatti (Florence) started an ambitious digitization project, the first results of which are already available. These include photos of the Life of Saint Francis cycle from the Upper Church of San Francesco in Assisi,  taken during restoration carried out by Bruno Zanardi in 1974-1983.
I had some problems getting to the actual images within the Harvard University Visual Information Access system. You get the full set of images most easily by searching there for "Zanardi". Each image has a subset of detail photos, with high quality scans.

Finally, I would like to mention a Hungarian website and accompanying database. The website of the National Széchényi Library is dedicated to early Hungarian printed books, and consists of two parts. First, the section titled The Hand-Press Period, contains detailed information about 15-16th century printing houses and printed books from the territory of the Kingdom of Hungary, with lots of images. The other section - called Clavis Typographorum Regionis Carpathicae - is a database for printing and publishing that includes all data of printing houses and publishers working in the actual territory of the Hungarian state from the beginnings of local printing in 1473 to 1948. The entire website is available in Hungarian and English as well - making it a very useful resource for the early history of the printed book.
Posted by Zsombor Jékely on 12/19/2010