Detail views of Salgó chalices at the Metropolitan 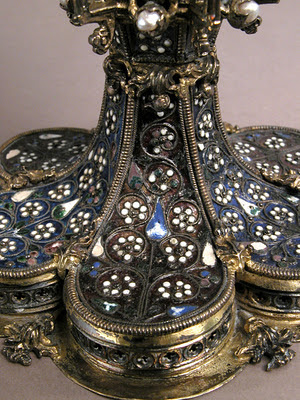 The Metropolitan Museum has just made available a number of detail photographs of the two medieval chalices which had recently entered the museum from the Salgó collection. Both chalices date from the mid-15th century, and are decorated with a special technique very popular in late medieval Hungary: the so called filigree-enamel. In this special variation of the cloisonné enamel, the fields of enamel are applied inside loops and shapes of filigree wire attached to the surface of the objects. You can read about medieval enameling techniques in this article (pdf) by David Buckton of the British Museum.

The two chalices are now described on the Metropolitan website as of "Central European" origin. However, the technique and details of both chalices - which can be studies on these photographs - makes their Hungarian origin quite certain - there is plenty of comparative material available, such as this chalice. More information could be gleaned from the coat of arms on the foot of one chalice, and the inscription on the cup of the other.

These are the links to the object pages:

I wrote about the Salgó collection before in two previous posts.
Posted by Zsombor Jékely on 4/28/2011