Exterior restoration of the Abbey Church of Lébény

On my way to Vienna today (where my main goal was to see the exhibition on the medieval plans of the Stephansdom), I stopped at the Romanesque Abbey church of Lébény. Some alarming news emerged about the condition of the building in recent years, as photos on this Hungarian website also attest (click for 'more pictures'). Well, by now, work is well under way on the exterior restoration of the building, and almost the entire edifice is covered by a scaffolding. Heavy rain and wind prevented me to explore the building more closely, and there is also very little information available online on the ongoing restoration. Main tasks include a consolidation of the facades and the renovation of the roof of the edifice. They are also restoring the old parish building, with the intention of creating a new museum there. Work will go on throughout the summer.
The Benedictine Abbey of Lébény was officially founded in 1208, and it is believed that the church was  completed within a short time. Benedictine life went on with varied intensity during the Middle Ages, until the church was burned by Turkish troops in 1529, as they were marching towards the siege of Vienna. The vault of the nave was not even repaired until the Jesuits took over the church in 1631. Those knowing the history of the region will not be surprised to read that the Turkish army burned the church again in 1683, en route to another failed siege of Vienna. The building was again fixed up by the Jesuits, and finally underwent major renovation during the 1870s.
Despite all these events, the church of Lébény can be regarded as one of the most intact Romanesque churches of Hungary. The fact that the church is still standing after 800 years is also due to those Italian stonemasons, who were sent there to dismantle the church at the time when the Ottoman Turks were advancing towards Győr. The stones of the monastery would have been needed to to repair the fortifications of Győr - but the masons did not carry out the job, saying the Lébény was the most beautiful church they have ever seen.
You can judge for yourself by looking at photographs at the following links:
Photos of the art history department of Pázmány Péter Catholic University
Hungarian summary of the church's history from the catalogue of the Pannonhalma exhibition on Benedictines in medieval Hungary (click on "Fotó" at the bottom of the page)
You can read on the current restoration here (in Hungarian)
Finally, here are some details of the stone carvings of the western portal seen from the lower levels of the scaffolding. 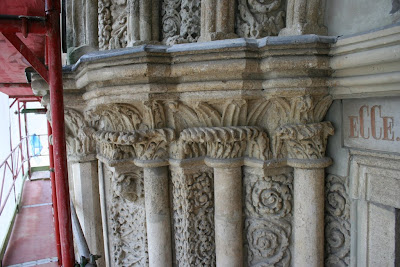 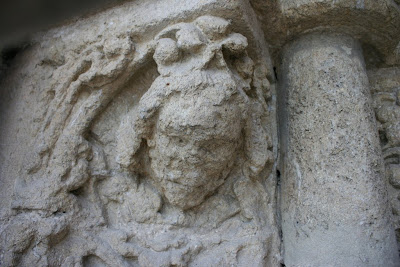 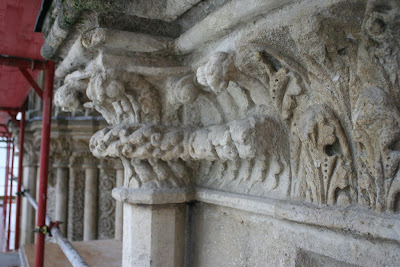