December 31st is the feast day of St. Sylvester, that is Pope Sylvester I (314-335), well known as the recipient of the Donatio Constantini, in which Emperor Constantine transferred power over Rome to the pope. The document is actually an 8th century forgery, as already proved by Nicholas of Cusa and Lorenzo Valla in the 15th century. Pope Sylvester also carried out several miracles - for example resurrecting a bull which was killed by a sorcerer during their contest or defeating a dragon which terrorized the populace of Rome. You can read his legend (from the Legenda Aurea) here. The Hungarian Angevin Legendary illustrates his story in six scenes (all in the main body of the codex, which is at the Biblioteca Apostolica Vaticana); I am including the two scenes mentioned above.

In this post, however, I would also like to commemorate another Sylvester, Pope Sylvester II (reigned 999-1003), that is, the scholar Gerbert d'Aurillac. Gerbert became pope with the support of Emperor Otto III, and played a crucial role in establishing the Kingdom of Hungary as the newest Christian monarchy of Europe. He established the first archbishopric of Hungary at Esztergom, which became the center of the Hungarian church. The pope also approved the coronation of Hungary's newly baptized ruling prince, István - who became Hungary's first king. According to early chronicles and legends, the pope sent a crown to Stephen for this event. The coronation of St. Stephen took place on January 1st, 1001 (by most accounts). For his role in establishing Hungary as a Christian Kingdom, Stephen was canonized in 1083. 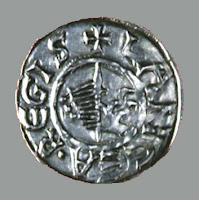 At this point we briefly have to review the regalia associated with King Stephen I. It is known that the first symbol of his rule was a lance, which he received from the Emperor, and which was associated with the Holy Lance, one of the imperial relics. This insignia did not survive, but its former existence is proven by the first silver denarius of Stephen, which carries the inscription LANCEA REGIS.  St. Stephen is also depicted with a lance in his right hand on the Coronation Mantle, while in his other hand he is holding a globe. This original globe did not survive, there is an early 14th century globe in its place among the Hungarian coronation insignia.

The Coronation Mantle itself, however, survives. It was originally a chasuble, which - according to its inscription - was ordered by Saint Stephen and his wife Giselle in 1031, and donated to the Church of the Virgin Mary in Székesfehérvár. The chasuble was probably prepared for the planned coronation of Stephen son, Prince St. Emeric - which did not take place due to the unexpected death of the young prince. It was transformed into a coronation mantle during the 13th century, and has been in continuous use during the coronation ceremonies until 1916, the coronation of the last Hungarian King, Charles IV. It is today in the Hungarian National Museum.

The oldest surviving element of the Hungarian coronation insignia is the specter. It consists of a rock crystal ball and a handle. The rock crystal was carved in Fatimid Egypt during the tenth century, so it could have been already in the treasury of King Stephen. It was most likely attached to the present-day handle during the twelfth century - although one of the esteemed researchers of the regalia, Endre Tóth believes that the entire specter dates from the time of King Stephen I.

Another symbol of royal power was the sword. The sword, which is presently part of the Hungarian royal insignia, dates from the 15th century. Two other swords, however, are likely connected with Saint Stephen:
The 10th century Hungarian saber in the Kunsthistorisches Museum, Vienna was the insignia of Hungary's ruling princes and was probably still in use at the time of St. Stephen. The saber got out of Hungary during the 11th century, and later became part of the imperial regalia, as the Saber of Charlemagne - and thus is kept at the Schatzkammer in Vienna to this day. 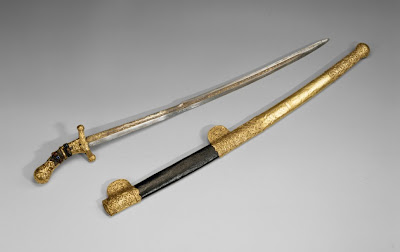 Finally, what about the crown Pope Sylvester II sent to Stephen for his coronation on New Year's day of 1001? Of this nothing certain is known. Historical investigation has found no proof that the pope had actually sent a crown to Stephen - the story is only known from the early 12th century biography of St. Stephen, the so-called Hartvik-legend. The Holy Crown of Hungary had of course been regarded throughout history as the crown of St. Stephen - but in reality it is not. It is a crown which was combined of two parts some time in the late 12th century. The lower part of the the crown is a Byzantine female crown which was given by Emperor Michael Dukas VII to King Géza’s wife around 1075. The upper part of the crown - the so-called Corona Latina - also dates to the 11th century, and was originally part of an unknown object, an object possibly in the treasury of St. Stephen. 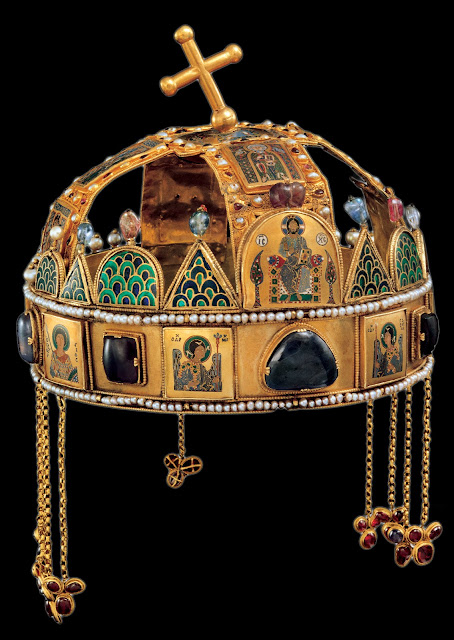 You can learn more about the Hungarian coronation insignia on my website or from an earlier brief post here.

My Hungarian-speaking readers may want to look at a recent article by Endre Tóth about King St. Stephen and his coronation insignia: