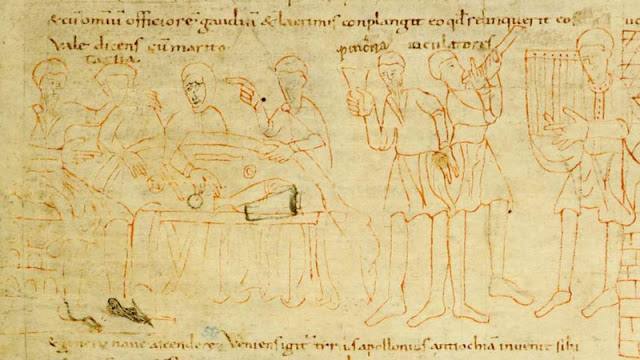 The National Széchényi Library just announced that an exclusive facsimile edition of the so-called Apollonius manuscript has been released, accompanied by a collection of studies by international authors.

The oldest medieval manuscript of the National Széchényi Library is a fragment, which has recently been identified (COD. Lat. 4). It contains a late-antique "adventure novel" of the story of King Apollonius of Tyre. The novel enjoyed great popularity in the Middle Ages. The manuscript contains not just the text of the novel, but 38 uncolored pen drawings, making it the oldest illustrated copy of the story. Despite the importance of the manuscript, it has been almost completely unknown.

The parchment manuscript was written around the year 1000, in the Benedictine monastery of Werden an der Ruhr, situated in the archdiocese of Cologne. The manuscript remained there during the Middle Ages, but then entered a collection in Cologne. By the 18th century it was held at the Evangelical Convention in Sopron, from where in 1814 it entered the National Library.

The manuscript was identified and first analysed by two researchers, Anna Boreczky and András Németh, and by 2010, a number of foreign researchers - most notably Xavier Barral i Altet - were involved in first phases of research, the results of which were presented to the public on December 8, 2010. The present facsimile edition is the result of a international collaboration, and is accompanied by multi-language commentary. The commentary volume starts with an introduction by Ernő Marosi, and was written by Xavier Barral i Altet, Anna Boreczky, Herbert L. Kessler, András Németh, Andreas Nievergelt and Beatrice Radden Keefe. In addition to the basic data and a bilingual (English and Hungarian) description of the manuscript, a critical edition of the text is also included.

The above text is based on the information released by the National Széchényi Library. A review will follow, once I get hold of the publication. Below is one page of the fragmentary manuscript.