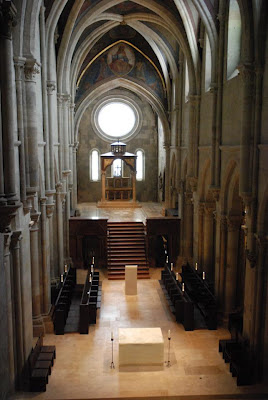 The medieval church of the Archabbey of Pannonhalma was restored over the last few months, and was solemnly reconsecrated today. The interior reconstruction of the 13th-century abbey church was carried out according to the plans of British architect, John Pawson. The reconstruction mainly focused on the main liturgical area of the church, the chancel and the monastic choir. The main goal of the alterations was to restore the simplicity of this space, and this meant the removal of the 19th century historicising decoration designed by Ferenc Storno (Storno similarly removed the earlier Baroque furnishing of the basilica, to make way for his own, 'historically correct' decorations - now his work suffered a similar fate). The Storno-reconstruction, which was completed in 1876, was the last major intervention inside the church. Storno's pulpit was moved to a chapel at Pannonhalma, while the 19th century stained glass windows - including the large rose window depicting the patron of the church, St. Martin - have been deposited at the Museum of Applied Arts in Budapest. On the other hand, the painted glass panes of the side aisle remained there, and the vault frescoes of Storno were cleaned.

The ideas of Pawson are summarized in the following statement he made:  ‘The goal of the architectural scheme made for the reconstruction of the Basilica of the Archabbey of Pannonhalma is to develop a space suitable for harmonic reception of the community of monks and their liturgy, meeting the needs of the local community and visitors. This goal was achieved by getting rid of several makeshift elements appearing in the use of space, and the character of “storage of historic furniture” was also eliminated. The purpose of the interventions was a uniform space in the church where each part and element of space has its own role and significance, and functionally and visually contributes to the development of the space designed for prayer and meditation, which are considered the basic function of the place. The plan attempts to redefine the space of the church structured axially, ascending within its section, orienting towards the sanctuary, and finally to the rose window in order to emphasize the meaning of the space: the way of Christians. On the one hand, the key is a complex and deliberate process of catharsis; on the other hand it is a careful equilibration of the existing historic layers.’

The monks of Pannonhalma took notice of Pawson when he built the Cistercian abbey church of Novy Dvur in Bohemia, and he received the commission along with a Hungarian architectural studio. Along with the reconstruction of the church, this year also marks the completion of the rebuilding and expansion of visitor service areas at Pannonhalma. in 2010 a new visitors’ center was opened on the hilltop near the abbey. In 2011, a new entrance for visitors was opened on the bastion on top of the hill of the abbey.

The Benedictine Archabbey of Pannonhalma is one of the oldest historical monuments in Hungary, founded in 996. It is a World Heritage site. The present church of Pannonhalma was built in early Gothic style at the beginning of the 13th century during the reign of Abbot Uros, and was consecrated most likely in 1224.

You can read more about the reconstruction on the website of the Hungarian Presidency of the EU.