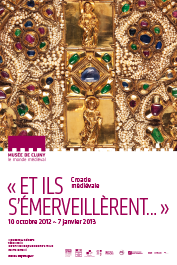 
Starting from 1102, the kingdom of Croatia lost its sovereignty and was ruled throughout the Middle Ages and later in the form of a personal union with the Kingdom of Hungary. The northern part of present-day Croatia, Slavonia, was part of Hungary proper, while the region of Dalmatia often changed hands between Venice and Hungary. At the time of king Louis the Great, Hungarian power was restored in Dalmatia in 1358 by the Treaty of Zadar. History and art in the territory of Croatia is thus inseparably connected to the medieval Kingdom of Hungary, evidenced by various works in the treasuries of Croatia originating from the centers of the Kingdom, including royal gifts - such as the series of treasures donated to Zara/Zadar by Louis the Great and his wife, Elisabeth. The object selected for the poster of the exhibition - the 14th century mitre from the Treasury of Zagreb cathedral is just such an object, likely donated to the cathedral by Louis the Great. However, it is still not entirely sure, whether this precious work - reworked in 1549 - was originally made in Hungary or Venice. Restored during 2005, the object was also shown in the 2006 exhibition dedicated to King and Emperor Sigismund, the successor of Louis the Great.


The present exhibition features about 40 select works of art, including reliquaries, illuminated manuscripts, warrior equipment, and jewellery. It was organised as part of an ongoing Croatian festival in France, called "Croatie, la voici", which runs from September 2012 to January 2013. The festival is the result of a Croatian-French strategic partnership signed in 2010 by the presidents of the two countries, and the exhibition was also opened by the presidents. The exhibition, titled "Et ils s’émerveillèrent…" - Croatie médiévale opened on.October 10, and will remain on view until January 7, 2013. The exhibition is accompanied by a small catalogue. You can read a little more on the exhibition in the official press release of the museum (pdf), or on the website of Croatian Tourism Office, but overall, very little is available on the exhibition online so far. A slideshow of the exhibition is available on the Flickr-site of the cultural festival, also embedded below.