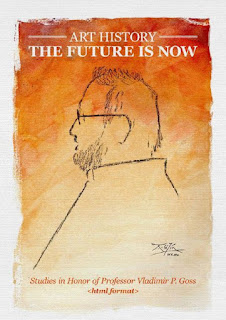 Romanika.net, a Croatian website dedicated to the project "The Romanesque between the Sava and the Drava Rivers and European Culture," published a new online book on medieval art. Titled Art History - The Future is Now, the book contains studies published in Honor of Professor Vladimir Peter Goss celebrating his 70th birthday, 45 years of publication, and 40 years of university teaching. The editors of the volume are Maja Cepetić, Danko Dujmović, Vjekoslav Jukić, Aleksandra Nikoloska.

The studies in the pdf volume are published in English or Italian language (also including some in Croatian and German), and their subject matter ranges from ancient portraiture to Romanesque architecture and sculpture to Italian Gothic art.  The first section represents contributions by the 'Masters and their Heirs Apparent', the second by the 'Young Lions'. The authors come from various countries (9 total) - and include one Hungarian, Béla Zsolt Szakács, who writes on Santo Stefano Rotondo in Rome.  Among the authors there are Archeologists, Art Historians, Cultural Anthropologists, Linguists, reflecting Professor Goss’ true interdisciplinary orientation – of looking for the best in related fields. The book also contains a biography and bibliography of Professor Goss, as well as a study by Goss himself - reflecting on the present state and future of art and its history.

While calling attention to this new online publication, I would also like to recommend the romanika.net website in its entirety, as it reflects the interests of Professor Goss very well. The research project, to which this website belongs, surveys Romanesque sites between the Sava and the Drava rivers - the area now generally known as "Continental Croatia", which was part of the Kingdom of Hungary throughout the Middle Ages (equalling the northern part of Slavonia). The project is dedicated to "discovering the sites lost and forgotten long time ago, and thus creating outlines of a totally lost and forgotten cultural landscape. The main goal is to make the art of the Pre-Romanesque (both pre-Christian Slavic and Christian) and Romanesque in Croatia receive recognition and appreciation it fully deserves."

From this space and in the form of this brief post, I would like to salute Vladimir Goss, and wish him a lot of success in carrying this important project further! Sretan rođendan!