Once more on "Botticelli in Esztergom" 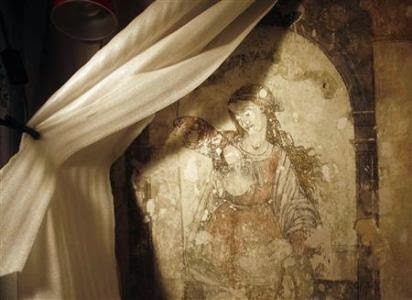 It has recently been stated by the Hungaarian government that new financial sources have been provided for the completion of the restoration of the medieval castle complex in Esztergom, in particular that of the early Gothic castle chapel and the adjoining spaces, which are decorated with frescoes. The 14th century frescoes of the chapel as well as the late 15th century frescoes of the so-called 'Studiolo' have been under restoration since 2000 - an impossibly long time. With the new funds, the end maybe is in sight - the chapel will be accessible again as early as next Spring, while the frescoes of the Studiolo will be on view again in 2015.

Recently, most attention has been given to these Renaissance frescoes, following the sensational claim made by restorer Zsuzsanna Wierdl and art historian Mária Prokopp in 2007 that the figure of Temperantia from a series of the Virtues was painted by the young Botticelli, who was in Hungary during the 1460s. Although disputed soon after the announcement, the authors keep repeating this claim, which has been published in various places - including the acts of the 2007 conference on Italy and Hungary in the Renaissance, held at Villa I Tatti in Florence. I reported on this claim and some response it received in an earlier post. According to an article published this week in Hungarian daily Népszabadság, the authors claim that their attribution of the fresco to Botticelli has gained acceptance and has not been refuted until now. In fact, they now believe that all surviving figures of the Virtues can be attributed to Botticelli. Well, Népszabadság may not be an authoritative source on questions of attribution - but it is definitely wrong on the issue of responses to the Botticelli-attribution. Let's see a few publications on the subject!

First, I would like to call attention on the publications of Mária Prokopp and Zsuzsanna Wierdl. The attribution to Botticelli was first presented at the Villa I Tatti conference held in 2007 - the conference volume has since been published, with texts by both authors on the subject. The authors have also published a Hungarian-language book on the subject, and their arguments have been summarized in a number of other publications, for example in Rivista di Studi Ungheresi in 2012. If you would like just a quick overview, read the article by Mária Prokopp, published in Hungarian Review. In addition to stylistic and historical arguments, the attribution rests on the interpretation of the letters MB incised in the frescoes, supposedly referring to  "(Alessandro di) Mariano, detto Botticelli".

In the following, I would only like to concentrate on the claim that the attribution has not yet been refuted - which is simply not true. Many experts have voiced their doubts immediately after the original announcement. Louis A. Waldman was the most vocal, expressing his concerns in a lenghty interview in 2007. Other experts, most notably Miklós Boskovits, were similarly sceptical. These doubts have also been expressed in a number of publications as well. Ernő Marosi summarized the history and the media sensation surrounding the frescoes in 2007 - stating that the original attribution of the frescoes to an unknown Florentine painter, working at the end of the 15th century is a much more realistic attribution than the claim of Botticelli.

More importantly, Louis Waldman has also summarized his arguments in the Villa I Tatti conference volume - clearly refuting the attribution to Botticelli. Waldman is clear when writing about the frescoes: "Though Botticellian or Filippinesque models certainly lurk behind the Virtues, their awkward, slightly ponderous proportions, vacant facial expressions, and heavy-handed draftsmanship point to an artist steeped in the models of the late Florentine Quattrocento," finally summarizing as such: "the Esztergom frescoes are fine but artistically somewhat modest examples of Italian Renaissance painting in Hungary, by an artist who was clearly influenced by the art of Botticelli’s and Filippino’s generation but who himself was a rather maladroit and inept draftsman." Instead of the Botticelli-attribution, Waldman calls attention to "maestro Alberto fiorentino,” a painted mentioned in Esztergom in the mid-1490s - although acknowledges that we cannot be sure in connecting the surviving frescoes with a surviving name.

In a more recent publication - published in Renaissance Studies in Honor of Joseph Connors - Waldman goes even further, calling the Botticelli-theory ridiculuous and bizzare. He then cautiosly proposes a new attribution and a solution to the problem of "Albertus pictor": he calls attention to the printmaker Lucantonio degli Uberti, who - according to his signature on a copy of Antonio Pollaiuolo's Battle of Nude Men - likely spent some time in Esztergom, and can tentatively be identified with "Albertus pictor florentinus" known from the Esztergom sources. Waldman claims that his style is quite consistent with the style of the Esztergom frescoes (at least as much as we can see of them now).

The Botticelli-attribution has thus clearly been refuted. Naturally, there is still more room for debate - but many experts are waiting for the frescoes to become accessible for study and research once again. As of today (and this has been the case for many years), they are largely inaccessible: they can only be seen on special occassions, by a limited public, and the room holding them is basically a construction site. Access to them is not easy, which severely restricts the ability of independent experts to visit and study the monument. For now, we are left to rely on the photographic documentation made available by the restorer herself (in publications as well as on the facebook page of her studio). Hopefully, if the restoration will indeed be finished in the near future, other experts will also express their opinions. Once thing is sure: no serious scholarly publications have so far accepted the attribution so vehemently put forward by Mária Prokopp and Zsuzsanna Wierdl.

I would like to finish on a more positive note. Connections between Florence and Hungary were indeed particularly strong during the second half of the 15th century - this is currently being demonstrated in an exhibition opening today at the Museum of San Marco in Florence. Even without Botticelli, the artistic connections demonstrated in this new exhibition surely make Hungary and the court of Matthias Corvinus stand out.

Louis A. Waldman, "Commissioning Art in Florence for Matthias Corvinus: The Painter and Agent Alexander Formoser and His Sons, Jacopo and Raffaello del Tedesco," In Italy and Hungary: Humanism and Art in the Early Renaissance. Acts of an International Conference, Florence, Villa I Tatti, June 6–8, 2007. Edited by Péter Farbaky and Louis A. Waldman. (Villa I Tatti 27). Florence, 2011. , 427-501, esp. 430-438.