In this post, I would like to announce three new books which contain a lot of information about the history of art in Buda, the medieval capital of Hungary (part of modern-day Budapest). Each of the books has a different focus, and neither of them can be considered a survey of the art of medieval Buda - but together they definitely provide significantly more up-to-date information than earlier publications. Previously, the most accessible English-language overview of medieval Buda was László Gerevich's The Art of Buda and Pest in the Middle Ages, published in 1971, while somewhat more recent information in German was provided by the exhibition catalogue of the Budapest History Museum and the Braunschweigisches Landesmuseum from 1991 (titled Budapest im Mittelalter). Now all of a sudden we have three new books which can be consulted by anyone interested in the art of Buda and its environs. 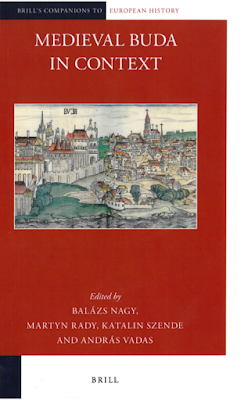 The first book will likely become the standard volume on the subject, given its well-known publisher and the wide circulation made possible through them. The book is titled Medieval Buda in Context, and it was published in Brill's Companion to European History series. Edited by Balázs Nagy, Martyn Rady, Katalin Szende and András Vadas, the book was published in the middle of 2016. Here is a description by the publisher:

"Medieval Buda in Context discusses the character and development of Buda and its surroundings between the thirteenth and the sixteenth centuries, particularly its role as a royal center and capital city of the medieval Kingdom of Hungary. The twenty-one articles written by Hungarian and international scholars draw on a variety of primary sources: texts, both legal and literary; archaeological discoveries; architectural history; art history; and other studies of material culture. The essays also place Buda in the political, social, cultural and economic context of other contemporary central and eastern European cities. By bringing together the results of research undertaken in recent decades for an English-language readership, this volume offers new insights into urban history and the culture of Europe as a whole."

Although the book has a historical focus, it contains a number of very important art historical studies as well. There are essays about the medieval topography of Buda and its ecclesiastical institutions, and on the role of Buda as a power center in the late Middle Ages. For art historians, Szilárd Papp's study on the statues commissioned by King Sigismund and the essay by Valery Rees on Buda as a center of Renaissance are perhaps the most important.

You can take a peek at the book in Google Books or, in fact, you can go straight to the full online version, if you have access. 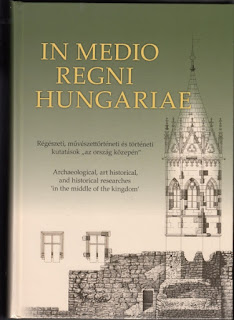 The second book has an archaeological and art historical focus, but it treats a geographically wider region: the central part of the medieval Kingdom of Hungary. Titled In medio regni Hungariae. Archaeological, art historical, and historical researches 'in the middle of the kingdom', the book was edited by Elek Benkő and Krisztina Orosz and published by the Institute of Archaeology of the Hungarian Academy of Sciences (Budapest, 2015). The book is not in English - the bulk of the text is in Hungarian, but a long English summary of each study is included in the book. These extensive English summaries and the large number of high-quality illustrations make the book accessible even to those who do not speak Hungarian. The 764 page book contains on overview of current research about royal centers in medieval Hungary, including Esztergom, Székesfehérvár, Visegrád and of course Buda. Studies in the book are organized according to themes: thus after introductory studies by Ernő Marosi, Pál Lővei and others, material is arranged into units on ecclesiastical centers and residences, then on other castles and material remains. Given the nature of the surviving material - as well as the publisher of the book - it is no surprise that the book has a strong archaeological focus. The table of contents can be downloaded here. A review by József Laszlovszky was published in the Winter 2015 issue of Hungarian Archaeology (direct link to pdf).


The third book is the English edition of an exhibition catalogue already discussed on this blog. It is dedicated to a comparative overview of the history and art of Budapest and Kraków in the Middle Ages. (On Common Path. Budapest and Kraków in the Middle Ages. Ed.: Judit Benda - Virág Kiss - Grazyna-Nurek Lihonczak - Károly Magyar, Budapest History Museum, Budapest, 2016.). The studies and catalogue entries in the book survey the parallel histories of Buda and Kraków from the period of their foundations to the high points of their development in the late Middle Ages.

The exhibition, shown earlier this year in Budapest, will be put on view in Kraków next year.

If you are interested in the history of Buda Castle, you should also have a look at the online database of architectural and municipal history of Buda Castle, created by the Budapest History Museum and the Research Centre for the Humanities of the Hungarian Academy of Sciences. This well-illustrated site gives an overview of the history and monuments of the settlement on top of the castle hill, and is available in English as well.