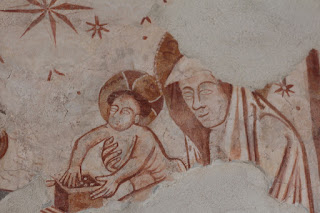 About a decade ago, wall paintings were discovered in the church of Gidófalva (Ghidfalău, Romania), which lies in the eastern part of Transylvania, in historic Háromszék (present-day Covasna County). After careful research and a painstaking process of restoration, the restored state of the fragmentary fresco cycle was unveiled on September 2019.  The restoration was carried out by restorer Loránd Kiss and his team of the Imago Picta company. Art historian Mihály Jánó from Sepsiszentgyörgy (Sfântu Gheorghe, RO) provided the following overview of the wall paintings for the readers of the Medieval Hungary blog.


The wall paintings of the church of Gidófalva were found on the walls of the nave of the medieval church. They were covered over in the course of the Reformation and were uncovered in a very fragmentary state. In fact, of the frescoes of the south wall, only traces of the painted curtain in the lower zone remained, the paintings themselves were destroyed.

Despite the fragmentary state of the remaining frescoes, the iconographic system of the decoration is relatively clear. Most survived from the upper register on the north wall: here we find a cycle depicting events from the Life and Passion of Christ. The narrative order of the scenes is reversed: the scenes follow each other from right to left. We see the Nativity next to the chancel arch, this is followed by the Adoration of the Magi, and we also see scenes of the Massacre of the Innocents, Flight to Egypt, the Entry into Jerusalem, and finally, by the western wall, the Last Supper.

The next cycle which can be identified with certainty is the Legend of Saint Ladislas, a story which was frequently depicted in Medieval Hungary. This is located in the upper row of the western wall, and the order of the scenes again runs from right to left. Only two scenes remain: the bishop blessing Saint Ladislas before he leads his troops against pagan invaders, and then we see Ladislas and his troops in battle against the Cumans. The following scenes of the story were likely painted on the southern wall of the nave. A few other scenes were also uncovered in the church, including a depiction of Saint George fighting the dragon, also on the western wall (lower register). The wall paintings of Gidófalva still await a more detailed analysis, but tentatively they can be dated to the turn of the 14th-15th centuries. Their discovery and restoration are significant for a better understanding of the art of medieval Transylvania.