The North of Byzantium initiative has launched a new open-access digital project – Mapping Eastern Europe – intended to promote the study, research, and teaching about the history, art, and culture of Eastern Europe between the thirteenth and seventeenth centuries among students, teachers, scholars, and the wider public.
Mapping Eastern Europe gathers a multitude of specialists – early career and senior scholars who have either already published or are currently researching new topics – to supply original online content in English in the form of historical overview, art historical case studies, short notices about ongoing projects, and reviews of recent books and exhibitions.
This platform aims to stimulate new research and outreach focused on the networked regions of the Balkan Peninsula, the Carpathian Mountains, and further north into early modern Russia, which developed at the crossroads of the Latin, Greek, Slavic, and Islamic traditions during the late Middle Ages and early modern periods. This a very wide focus, and so far most of the resources on the website are related to Byzantine and Post-Byzantine art - after all, the North of Byzantium initiative focuses on art and culture of the northern frontiers of the Byzantine Empire in Eastern Europe. The website has a map-based interface to browse overview, notices, and book reviews and it will be continuously updated. Already in this early phase, there are a number of pins in the territory of the medieval Kingdom of Hungary as well. 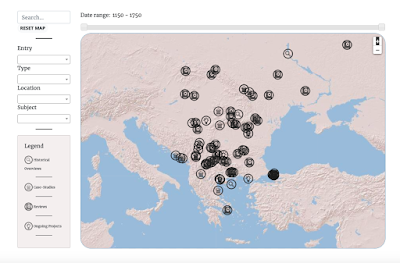 Mapping Eastern Europe is made possible through generous support from the “Rapid Response Magic Project of the Princeton University Humanities Council”. Co-founders and editors are: Maria Alessia Rossi and Alice Isabella Sullivan.
Website: https://mappingeasterneurope.princeton.edu/
Posted by Zsombor Jékely on 11/25/2020