The Restoration of the High Altar of Kisszeben 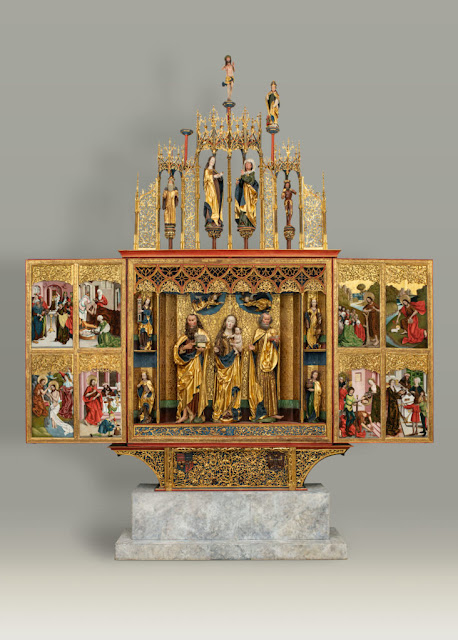 After many decades of restoration, the High Altar of Kisszeben (Sabinov, Slovakia) has been assembled in the Hungarian National Gallery. The restoration of one of the largest and most ornate winged altars from the medieval period of the Kingdom of Hungary began in 1954 and was completed in the summer of 2020. The high altar was put on view from 24 September at the Gallery’s exhibition titled Late Gothic Winged Altarpieces (it is currently not on view due to the national lockdown).
I wrote on this altarpiece several years ago, when it was first put on display at the National Gallery, at that time still without its gable - see this earlier post. Further details about the history of the altarpiece can be found there.
The winged altar, which was one of the largest and most ornate ones in the medieval Kingdom of Hungary, is dated to 1496 according to an inscription on the frame of the paintings - but it naturally took a longer period to complete. The altar was “renovated” in the baroque period, the panels of its workday side were all overpainted. This overpainting was not removed in the restoration campaign. The predella and the gable of the altar - both of which got seriously damaged - were both reconstructed. 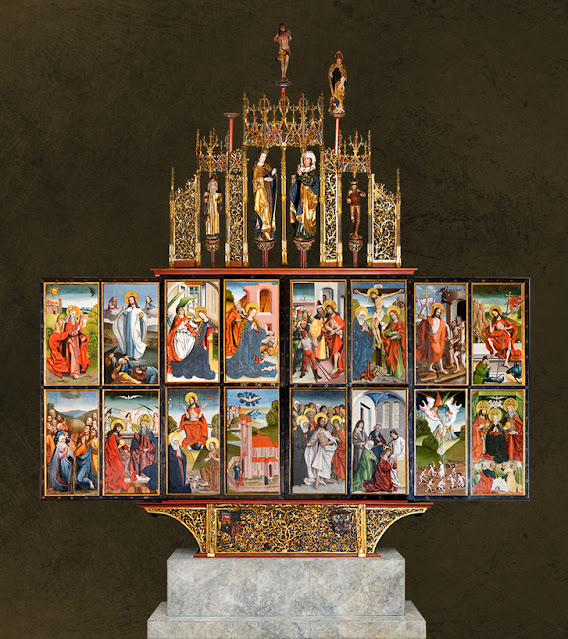 On the occasion of the completion of the restoration, a special website was launched by the Museum of Fine Arts - Hungarian National Gallery, and a short film was also released about the altarpiece (both are in Hungarian).
Art historians are also encouraged to read a study about the gable the altarpiece, which details the limits and possibilities of the reconstruction of this part of the altarpiece. Poszler, Györgyi: Kutatás-módszertani gyakorlat: új források, új gondolatok a kisszebeni Keresztelő Szent János-főoltár oromzatával kapcsolatban. Művészettörténeti Értesítő, 64 (2015/2). pp. 239-267.
(Source of text and images: Museum of Fine Arts - Hungarian National Gallery. For additional photos, see this report.)
Posted by Zsombor Jékely on 1/05/2021