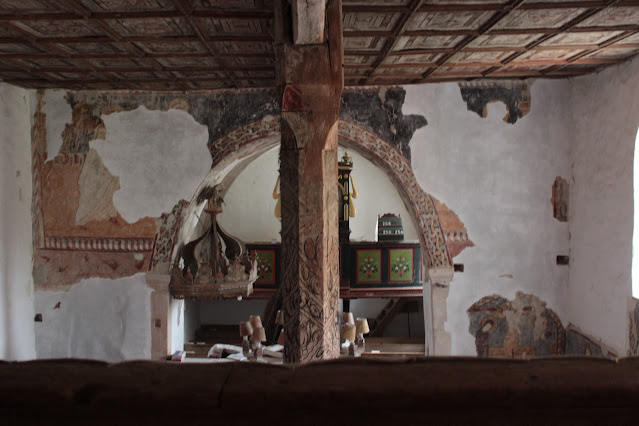 A press conference was dedicated to the church of Magyarvista (Viștea, Romania) at the László Teleki Foundation, to announce the result of recent investigations inside the medieval church of the village. The following overview is written on the basis of the press release. The Calvinist church of Magyarvista in Cluj County is one of the most famous medieval monuments in Transylvania and the area of Kalotaszeg. The stone-built, single-nave, square-apsed building with a Romanesque western doorway was probably built at the end of the 13th century. The first documentary mention of the village dates back to 1229, and in 1291 it became the property of the Transylvanian bishopric as a royal donation. The church is richly decorated with painted woodwork, the outstanding features of which are the converted late Gothic priest's chair, the coffered ceiling above the nave supported by a beam and a wooden column, the pews, the doorways of the south and west entrances, the altar, the pulpit, and the pulpit crown. An 18th-century belfry rises next to the building, the oldest bell in it dating from 1487, from the time of Matthias. During the last year the exterior masonry of the church has been strengthened, plastered and the roof structure repaired, as has the belfry. 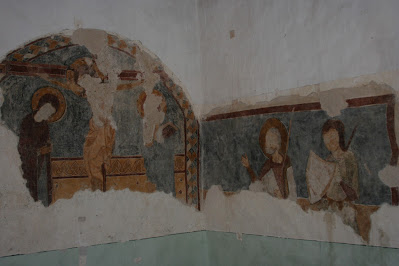 The building's hidden treasures had been highlighted by several research findings: in 1913, István Gróh documented in watercolor copies ten scenes of mural paintings located in the nave (they could not be restored and displayed at the time), and in 1935, semicircular foundation walls were found within the demolished sacristy, which may be part of a demolished medieval round church. One of the scenes copied by Gróh was found in 2008 on the south wall of the nave, and next to it, on two sides of the south-east corner, two related, previously unknown scenes were revealed: a three-figure Crucifixion and an image of St Longinus with an attendant. The wall painting on the south wall, depicting a storm-tossed ship of pilgrims, dates from around 1400, while the images in the corner date from the early 14th century. It has also been found that the painting of the corner was originally placed under a canopy and formed the decoration of an altar there - there are very few similar canopied altarpieces from medieval Hungary.

In 2022, with the support of the László Teleki Foundation, the uncovery of the mural paintings in the semicircular triumphal arch continued, and art historical research was also carried out. In this context, it was suggested that the interesting stone frame of the southern entrance and the square sanctuary are not Romanesque but late Gothic, as confirmed by some analogies of the frame of the sacristy door, and that the ribbed vault with the 1498 inscription on the keystone of the sanctuary is not the result of a later intervention, but this whole structure was, in fact, built at that time. 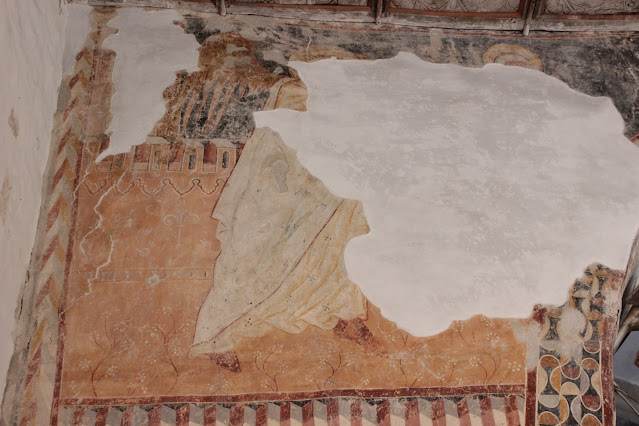 The excavation of the mural revealed a scene of the Annunciation on the eastern wall above the triumphal arch: on the left, a fragmentary figure of the Archangel Gabriel and the Lord, and on the right, a small detail of the standing figure of Mary can be discerned. The Annunciation, arranged on the right and left sides of the triumphal arch, has many foreign and local analogies: Palermo, Cappella Palatina, Reichenau-Oberzell, St. George's Church, Padua, Scrovegni Chapel, Karaszkó, Disznajó, etc. The scene belongs to the plaster layer of the early 14th century. 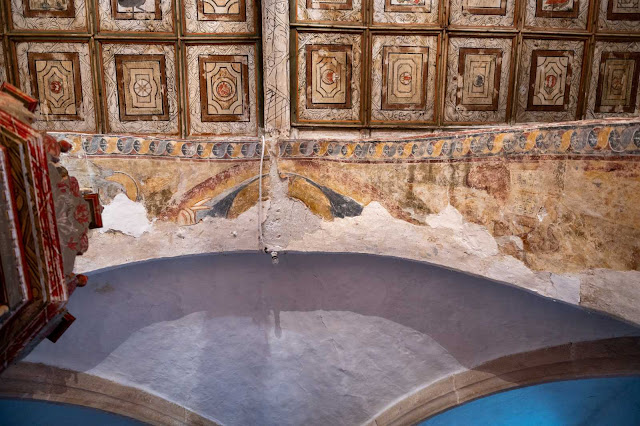 The research on the inside of the triumphal arch was also a surprise: the upper fragment of the figure of the Maiestas Domini, set in a mandorla in the center, was preserved: its continuation was on the vault of the demolished original sanctuary, which was much smaller than the one we have today. Thus, the fragment of the mural also proves that the present sanctuary is secondary compared to the nave. The figure of Christ was accompanied by the symbols of the four evangelists, two of whom, the eagle (John) and perhaps the angel (Matthew), the latter holding an open book, partially survive. The book's minuscule inscription is partly legible and contains a line from John's Revelation.  The painting continued on the side wall with the gallery of the apostles, of which 2-3 figures have been preserved, among them St Andrew can be recognized from the X-shaped cross. 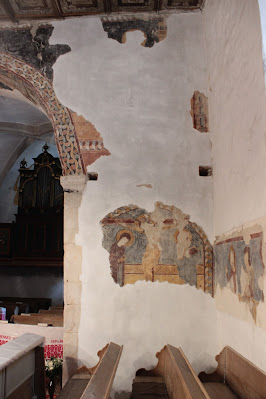 Stylistically, the mural paintings of the triumphal arch are in a style well known in Transylvania, usually called Italo-Byzantine without distinction. Analogies appear in many other places: Csíkszentimre, Felvinc, Boroskrakkó, Szék, Ördöngösfüzes, etc. Although this spectacular style is called Italo-Byzantine by some scholars, because of its widespread use it is more correct to speak of a Central European Gothic tendency using the Italian tradition of the Duecento period. The exact dating of the wall paintings of this group is (was) problematic, as no historical data, inscriptions or other information of any kind was available for any of the buildings, so the dating of the monuments oscillated in the literature from the 1310s to the 1340s. For this reason, the restorer's observation that the plaster of the fresco was in contact with the ceiling and, through it, the roof, was of particular importance. Dendrochronological analysis of the wooden elements of the ceiling can ideally be used to date the mural with annual (or even seasonal) precision, which can provide a post quem (later than ...) date for the mural. With the support of the László Teleki Foundation, this very important study was carried out, which revealed that one of the trees of the structure, which can be dated precisely, was cut in the winter of 1329-30 so that the construction of the structure could have taken place as early as 1330, and the wall paintings cannot be earlier than that. This date applies to the central beam supporting the wooden ceiling as well as the wooden pier in the center of the nave. Some parts of the original roof structure also date from this period. This information puts a secure dating to the Magyarvista wall paintings, and also to the entire circle of monuments

The dendrochronological research was carried out in the autumn of 2022 by the Anno Domini Dendrolab team from Csíkszereda, on the initiative of the wall painting restorers and art historians who were researching in the church. The study and subsequent laboratory analysis proved that the longitudinal central beam and the carved column supporting it in the nave date back to the 14th century, from the years 1329-30. The ring analysis of the beams built into the stone gable walls and of some elements of the present mid-17th century roof structure also indicated that the nave itself and its earlier roof structure were built at this time. In this case, the dating is year-specific, with oak felled in the winter of 1329/1330 being used for the former roof structure. 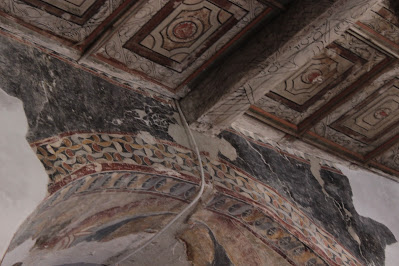 The dendrochronological research shows that the wooden roof of the nave and the former roof structure of the church in Magyarvista, as well as the column and the master beam supporting them, were built in 1330, making it the oldest surviving roof and slab structure in Transylvania, according to our present knowledge. The 14th-century roof structure can most probably be reconstructed on the basis of elements reused from the earlier structure when the present roof was built, but further field research and measurements are needed.

This discovery of particular importance encourages further research into wall painting, dendrochronology, archaeology, and art history, which we hope will take place in 2023. Hopefully, we will still get to see one day the fresco decoration of the church of Magyarvista. 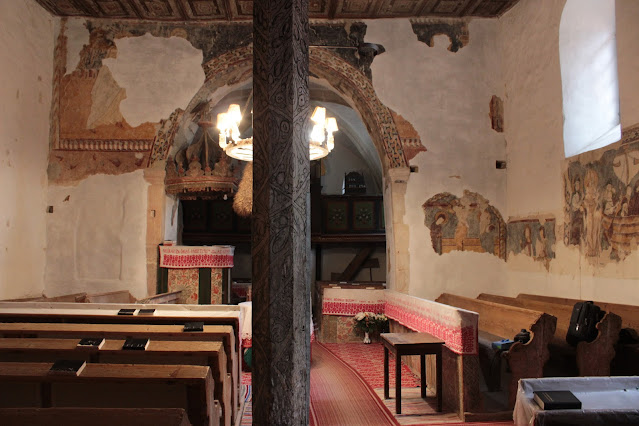