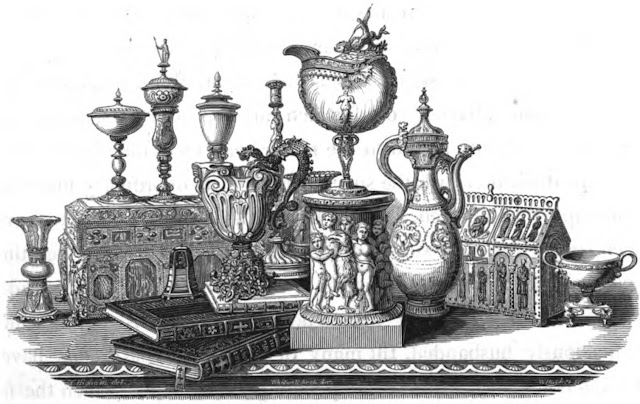 Based on these observations, it is quite certain that the Chinese porcelain vase known as the Fonthill vase was not mounted by Louis the Great, and certainly was not given to him by ambassadors from China in 1338 (this was purely conjectural, anyway, and did not take into consideration the Louis didn't even ascend the throne until 1342). It seems that we do not know when and how the vase entered the Neapolitan court - but it was only mounted there during the first decades of the 15th century. It still might be the earlies documented Chinese luxury porcelain object in Europe, but - flattering as it would be to us - there is absolutely no proof of it ever being in Hungary. When it comes to oriental objects in 14th-century Hungary, we have to settle for less spectacular pieces, such as this Syrian albarello recovered at the royal palace of Visegrád.

Even if the Fonthill vase was never in the Hungarian court, there is one more reason why this objects is featured in a blog on medieval Hungary. Soon after the Gaigneres drawing had been published by Mazerolle in 1897, another watercolor illustration of the mounted vase came on the market in Paris, which was duly purchased by Jenő Radisics, director of the Museum of Applied Arts in Budapest. This colored drawing is kept to this days at the Archives of the Museum where I work - and is illustrated here for the first time in color. You can also see the object in the collection database of the Museum of Applied Arts.

Reference: Jenő Horváth: The pedigree of Louis the Great's ewer. In: Louis the Great, king of Hungary and Poland. Ed. Vardy, Steven B. - Grosschmid, Géza - Domonkos, Leslie S. New York, 1986. 325-345.
UPDATE 2021 - I summarized the history and the research history of the Fonthill Vase in a brief study, which you can access on my academia.edu page.