Europa Jagellonica - Exhibiting the Heritage of the Jagiellonian Era 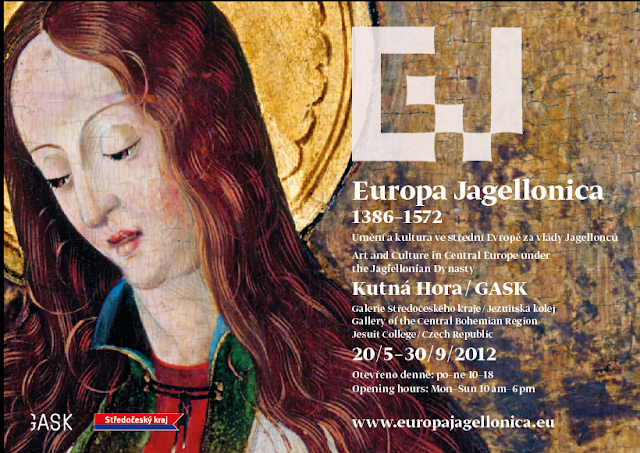 The Europa Jagellonica exhibition has recently finished its run, closing at the third venue, in Potsdam. I had a chance to see the show in Kutná Hora, as well as in Warsaw, and have seen all the publications accompanying it. In the following, I will provide a brief overview and review of this major European project.
As the website of the project informs, the international exhibition EUROPA JAGELLONICA is a joint Czech-Polish-German project and the first exhibition on the European dynasty of the Jagiellonians during the period around 1500, which was of great significance for Europe.

This project has been in the making for a long time. Organized by the Centre for History and Culture of East Central Europe at the University of Leipzig (GWZO), the basis for this project was the interdisciplinary and international research project, "The Significance of the Jagiellonian Dynasty in Art and Culture of Central Europe 1454–1572", which was carried out from 2000 to 2005. Dr. Jiří Fajt (GWZO) is the chief curator of the project, and Dr. Susanne Jaeger (GWZO) is responsible for the coordination. After several unsuccessful attempts, the exhibition finally got the green light as well as European funds, and was realized together by the Czech Republic, Poland and Germany. Hungary - which was originally supposed to have been part of project - did not become an organizing partner and a venue in the end, but contributed several loans to the exhibition.
The exhibition is quite different at all three venues. Even in the planning phase, it was decided that each venue will have a special focus: in Kutná Hora it was silver mining and economic history, in Warsaw the significance of the Jagellonians for Poland, while in Potsdam, the local theme is the marriage policy of the dynasty, and contacts with the Holy Roman Empire. In addition, there are other changes of thematic focus from venue to venue, as well as somewhat different sets of objects. The Jagiellonian period in focus of the exhibition is summarized by the organizers:
"The time frame covered by the exhibition starts with the coronation of Jogaila (Władysław Jagiełło) in 1386 as King of Poland. Thanks to prudent political alliances, the Jagiellons ascended to the thrones of Bohemia and Silesia in 1471 and of Hungary in 1490. The resulting commonwealth of nations – Europa Jagellonica – spanned vast territories with a total area surpassing two million square kilometres, from the Baltic to the Black and Adriatic Seas. At the same time, strategic marital unions arranged for Polish princesses expanded the family’s influence to include the Reich states – Brandenburg, Braunschweig, Bavaria and Saxony. This unique amalgamation in Central Europe left its mark on not only the political atmosphere there but on the economies of the individual nations, the intellectual culture and social mentality of the day, and the arts. [The exhibition] will highlight the period’s unique circumstance of cultural diversity amidst unity – the coexistence of regional cultures and the formation of a common tradition. From such a perspective, the old Jagiellonian commonwealth becomes a fascinating reference point for reflections on modern times." 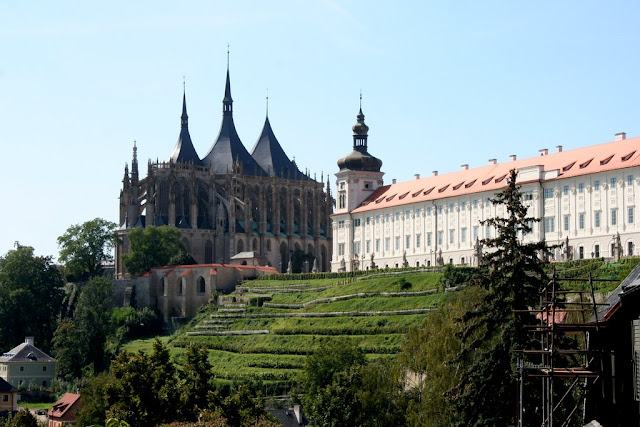 The exhibition was the most complete in Kutná Hora. Organized at a perfect venue, the Gallery of the Central Bohemian district (GASK), located in the former Jesuit monastery right next to the church of St. Barbara, the whole town was in effect part of the exhibition. The newly renovated building provided a great location for the exhibition, and it was comfortable to walk through the exhibition. The full list of the sections of the exhibition were unfolded here, which was easy to follow - although contained a few repetitions in my opinion.

The next section was dedicated to the areas of Jagiellonian rule, titled "Where did the Jagiellonians rule?" It introduces the main kingdoms and regions where the Jagiellonians ruled: including Lithuania, Poland, Bohemia and the Kingdom of Hungary and Croatia. This latter unit - the most interesting from the point of view of the present blog - was divided into several sections: the center of the Kingdom, with special mention of Budapest (an anachronism) and Esztergom, as well as Upper Hungary (roughly the present-day Slovakia); Transylvania and Croatia. A great selection of loans introduced the artistic flourishing of these regions during the late 15th-early 16th century. There was some overlap with the previous section, which already introduced the main residences of the dynasty, located in these same countries.

The final section of the exhibition was focusing on a few special themes of the period: topics such as the role of mining in the period, the emergence of Humanism and similar themes, including some art historical problems.

This structure of the exhibition resulted in a few surprising solutions. Take the example of Buda, as a royal center. Material from Buda was quite fragmented in the exhibition: Buda was first introduced as a Jagiellonian residence, at the time of Wladislav II and Louis II (1490-1516, 1516-1526). Mainly a few stone carvings and archaeological finds illustrated the town. After this Buda was also featured in the section focusing on the predecessor of Wladislav II, king Matthias Corvinus. The section on Matthias introduced a few chief works - such as the central relief of the main altar of the St. Martin church in Pozsony/Bratislava. Overall, however, very few works were dedicated to this period - which was featured in the exhibition after what followed it under the Jagiellonian rulers. Vladislas II and Louis II were also featured as individual characters in the exhibition (Who were the Jagiellonians), with portraits, documents, historical objects. But then Buda returns again in the section dedicated to Jagiellonian territories. I think we would have received a clearer picture of the center of the Kingdom of Hungary with the same objects, but in a somewhat different arrangement.
The highlight of the Kutna Horá exhibition was the very rich material from Bohemia and Moravia, which showed the richness of late Gothic art in the post-Hussite Czech Kingdom. In fact, the whole town served as an illustration of this - a walk through the churches of Kutná Hora rounded out the exhibition. This most complete selection of objects as well as the great venue together contributed to the success of the exhibition - which was by far the most successful of the three venue. According to press releases, about 350 objects were shown there, and the exhibition had about 60.000 visitors.


The exhibition in Warsaw followed the same structural organization as the original at Kuta Horá, but was burdened by two unfortunate circumstances. The first was the decision to split up the exhibition between two venues: the Royal Castle of Warsaw and the National Museum. The first sections of the exhibition - about the key players of the dynasty and the residences - were at the castle, while the grand geographical overview and the closing thematic sections of the exhibition were at the National Museum. Given the fact that the two places are at least half an hour away (on foot), it was hard to grasp the exhibition as a whole. If Warsaw was chosen as a venue instead of Cracow (a true Jagiellonian city), than at least the exhibition should have been kept together, at one venue. The other strange factor was the almost complete lack of Czech loans in the exhibition - as a result, the sections on Bohemia which were so rich in Kutná Hora were far less exciting at the second venue.

The sections on Hungary and its territories were strong in Warsaw: there were a few additional objects (mainly from the Museum of Applied Arts) in the section about King Matthias, and the wonderful objects from the Brukenthal Museum in Sibiu/Nagyszeben/Hermannstadt as well as from the cathedral treasury in Zagreb/Zágráb were all there to illustrate the flourishing of late Gothic goldsmith art in the kingdom. A set of photos taken at the Warsaw exhibition is available at Flickr.


I did not see the third venue of the exhibition in Potsdam, but I know that due to the constraints of space, it was a lot smaller than the previous two. Only about 100 objects were displayed here, and the structure of the exhibition was also simplified. Maybe this simplified structure would have worked well with the full material in Kutna Horá. The exhibition started with introducing the geographical scope of the exhibition (Where did the Jagiellonians rule?), before moving on to the main personalities (Who were the Jagiellonians?), with a special emphasis on the marriages of the Jagiellonians. The final, thematic section's title was: What was the moving force of Jagiellonian Europe? - and it focused on mining, devotion, Humanism as well as problems of art at the dawn of the early modern era.
It also has to be emphasised, that much of the artistic heritage from the period cannot be shown at exhibition, as it consists of works to be seen in situ: castles, churches, mural paintings and large altarpieces. Just like at Kutná Hora the whole setting was part of the exhibition, the small catalogue of the Potsdam venue includes a number of monuments which are to be seen at their original location (primarily in Görlitz and Bautzen).

So far no large exhibition catalogue has been published. In all three venues, the exhibition was accompanied by an exhibition guide, published in Czech, Polish and German/English. This guide contains the introductory texts for the sections of the exhibition as well as brief catalogue entries on the objects. Hopefully, a full catalogue, with detailed studies about the sections and topics of the exhibition, will also be released soon by the GWZO. Only then can we fully evaluate the scholarly value of this entire enterprise. After all, the exhibition series was the result of a fifteen-year research programme, which already resulted in a series of important books published by the GWZO, in the Studia Jagellonica Lipsiensia series.


Overall, the three exhibitions presented the last flourishing of late Gothic in Central Europe with a wide range of first rate artworks. The focus of the exhibition was definitely the Late Gothic art of the period - Renaissance works only appeared in small numbers, especially in the section about Buda and Matthias Corvinus. The period, which saw the completion of large Central European parish churches and cathedrals, as well as royal residences and city halls was perhaps the last time when the large Kingdoms of Central Europe - especially Hungary and Poland - were a defining force in the cultural landscape of Europe. In Hungary, further development was cut short by the disastrous battle of Mohács against the Ottoman Turks, where Louis II, our last Jagiellonian king was also killed. With his death, Jagiellonian rule ended in Hungary and Bohemia, to give way to the Habsburg dynasty and a new chapter in history. The dynasty finished where it started from: in the Polish-Lithuanian personal union at the time of Sigismund I the Old and Sigismund II Augustus.

Europa Jagellonica 1386-1572. Art and Culture in Central Europe under the Jagiellonian Dynasty