The medieval parish church of Pest (part I.) 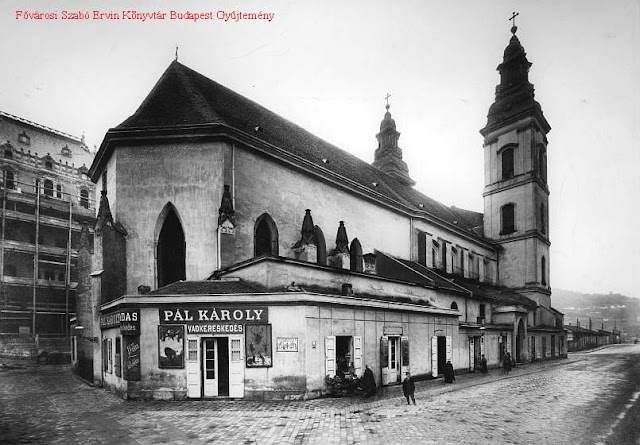 The Inner City parish church is perhaps the most frequently-seen, yet most overlooked major medieval building in Budapest. Standing in the middle of the city, right next to Elizabeth bridge, modern-day citizens of Budapest zoom by it every day. The church, however, preserves great medieval artworks and still holds many surprises. On the occasion of the discovery of a great 14th century fresco inside the church, I am writing a two-part post on the history of the edifice.

Modern-day Budapest was created in 1873, when the cities of Buda, Pest and Óbuda were united. The center of Buda, the settlement on castle hill was founded after the Mongol invasion (Óbuda, or Old-Buda was somewhat north, at the area of the Roman town of Aquincum). Pest, on the other side of the Danube, was older. For most of the Middle Ages, Buda - the site of the royal castle - played a more important role, but Pest developed into an important town as well. In the center of the town, at the spot where the Danube was narrowest and at the site of a Roman fort, the parish church of the town was built.

Dedicated to the Virgin Mary, the first stone church was built around 1200. It was a Romanesque basilica, of which some parts survived inside the south tower of the present structure, and in the crypt of the present building.

This church was badly damaged in 1241, but it is unclear to what extent it had to be rebuilt. We know that during the second half of the 14th century, the chancel of the church was greatly expanded and fully rebuilt into a hall-church with an ambulatory. Further expansion was carried out in the late 15th century, when chapels were added to both sides of the nave, and new portals were opened into the side aisles. An imposing south tower was also built at this time. Side chapels were also added to both sides of the western end of the chancel area.

Only the chancel survived the Turkish wars, while the nave had to be entirely rebuilt in the early 18th century. Instead of the three-aisled medieval structure, the Baroque nave is a spacious hall, but the row of chapels on either side have been preserved.

For centuries, this church stood at the center of old Pest, adjacent to City Hall. A series of small shops were attached to the body of the church. This traditional center of Pest survived all the way to the end of the 19th century, and is thus known for a series of photographs (see the one by György Klösz on top of this page). The church was part of the urban fabric, with small squares around it. Unfortunately Budapest lost its center when the new Elizabeth bridge was built during the 1890s. City Hall and dozens of other buildings were demolished, and new avenues were opened. The church just narrowly escaped demolition - there were plans to tear it down or to move it, but in the end the new roadway leading to the bridge curved right along the church.

It was also at this time that the sanctuary of the church was rebuilt according to the plans of Imre Steindl. This Neo-Gothic rebuilding paid very little attention to the original features of the church. Steindl must have noticed most original features, but largely ignored them. He covered the piers with artificial marble, had the entire chancel repainted, and he also designed a new main altar to be built from Zsolnay majolica.
It was only during the 1930s, that the exterior walls of the church were researched by Kálmán Lux, and two Late Gothic portals and other features came to light (see this film from a 1933 newsreel). As research continued inside, a series of wall niches - some with frescoes - were discovered inside the chancel, pieces of the Gothic tabernacle were put together and the two large, red marble Renaissance tabernacles were moved to their present position. After World War II, the church had to be restored again, and that is when it got its new main altar and the present painted decoration of the chancel.
During all this work, the most important fresco of the church remained undiscovered. It was not found until 2010. In part 2 of this post, I will write about the medieval frescoes of the church.
Archival photos are from the collection of the Metropolitan Szabó Ervin Library. If you click on the picture below this link, you can see some present-day photos (most of them my own).